The Bridge Given to St. Catherine of Siena

Some leftist “Catholics” now call traditional Catholics names like “Pelagians.”  Pelagianism is the 4th century heresy that one could be saved by good works alone with no need for grace. It’s very ironic that leftists call traditionalists “Pelagians” since we are always confessing our sins to obtain the grace of forgiveness.

But the other reason it’s ironic that leftists call traditionalists “Pelagian” is because nearly every lefty-Catholic is a Pelagian by virtue of their own theology.  Here’s why:  Most lefty-Catholics believe that following one’s own conscience is enough to be saved, even if you die a pagan or Jew or Muslim.  That is exactly the same definition as Pelagianism, but with a new twist, namely, that one can be saved by one’s conscience, not by Jesus Christ. But this is why Pope St. Pius X said that modernism was “the synthesis of all heresies.”  Yes, buried deep within modernism is every single heresy from the first 1000 years of the Church’s battles.  Nowadays, it’s just re-branded for the 20th and 21st century sensitivities.

Modernism includes “Pelagianism” because everyone from Rahner to Von Balthasar to all of the much more vicious heretics today teach that basically everyone goes to heaven and no one goes to hell.  And by “basically” we can just push aside de jure discussions of advanced theology for the de facto reality:  Von Balthasar taught no one goes to hell if they did a few good works in their life.  Which is everybody.  Which is Pelagianism… that exact heresy that one needs no grace to be saved. 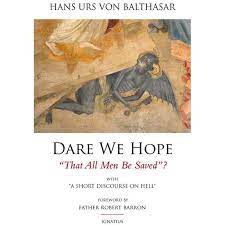 Now, I know every Von Balthasar fan here would say to me.  It goes something like this: “No, no!  Von Balthasar teaches the pagan who is saved is still saved by grace.”  My reply:  That’s a cop-out that collapses nature onto grace nevertheless, for Von Balthasar never explained how that pagan got his grace.  It always comes down to (again, not de jure, but certainly de facto) the fact that Von Balthasar essentially held practically to Rahner’s “Anonymous Christian.” Karl Rahner’s “Anonymous Christian” was essentially the teaching that any pagan or Jew or Muslim who has done anything nice in his life is secretly (and unknown to him) an “anonymous Christian” and therefore dies in a state of salvation because he was a “pretty good person in life.”

See how this is all just a re-branding of the old heresy Pelagianism?  In fact, nowadays, you-know-who goes far beyond Von Balthasar to teach a full-blown universalist unitarianism where any dying soul that would have been destined for hell is annihilated before arriving there in a could-have-been hell.  Ah, except maybe traditional Catholics because we are Pharisees and Pelagians, donchaknow?  But the abortion doctor who worked once in a soup-kitchen is apparently headed to heaven.

See how modernism is truly the re-branding of every single heresy in the Catholic Church’s history? 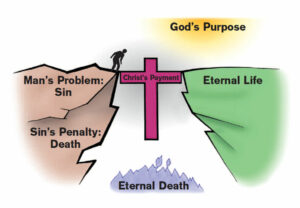 One of my favorite analogies to understand why we need Christ crucified and risen to get to heaven is how the cross is the bridge from our sinful life on earth to eternal life in heaven.  You may think this bridge analogy of the cross was first used by Campus Crusade for Christ (or another Protestant community) in their outreach to win souls to salvation.  But the “bridge analogy” was given from God the Father to St. Catherine of Siena in the 14th century.  It shows that Catholics have always believed we need grace (and normally cooperation with grace via righteous actions, but never good-works as a replacement for grace) to obtain eternal life.

God the Father said to St. Catherine of Siena: “It is my wish that you consider the bridge that I have built in the Person of my only-begotten Son, and that you notice that it reaches from earth to heaven, because in Him the majesty of the divinity is united with the lowliness of your human nature. It was necessary to construct this bridge in order to repair the road which had become impassable and to open a passage across the trials of this world to eternal life.”

St. Catherine said to to God the Father: “You are God, supreme wisdom, I am only a poor ignorant creature. You are sovereign, eternal goodness. I am death, You are life; I am darkness, You are light; I am stupidity, You are wisdom; You are infinite, I am finite. I am sick, You are the physician; I am a weak sinner that has never loved You: You are purest beauty and I a most vile creature. In Your ineffable love, You have drawn me to you.”