The Four Lacunæ of the “New Evangelization”

The “old evangelization” is better than the “new evangelization” not because old things are better (which is generally true) or that human-nature is more fallen than it was in the 16th century (which is also probably true) but because of two other specific reasons:

1) The “old evangelization” goes back to Apostolic times where the ascetical life of union with Christ drove the exterior life of spreading the Catholic Faith (unlike the “new evangelization” that is reliant on people being relevant and “contagious.”) 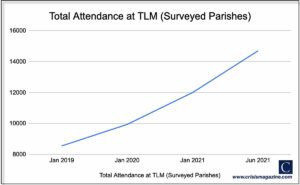 Crisis Magazine recently showed attendance at the TLM is growing, unlike… 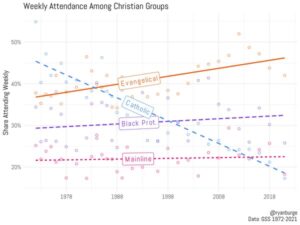 …mainstream Catholicism where weekly attendance among Catholics has been on a sharp decline since Vatican II, despite even the most lukewarm of bishops and pastors begging their people to be “missionary disciples.” How can you be a missionary disciple if you know less teaching than a traditional child who owns a Baltimore Catechism? The above graph also proves that the problem within the Catholic Church is internal to the Church, not external to the Church.  How do we know this?  Because evangelical Protestant communities continue to grow despite our general cultural-rot in the United States.

As I’ve written before, we were mendaciously taught in seminary to say our numbers in the Catholic Church tanked after Vatican II not because of Vatican II but because of the sexual revolution.  But if this were true, then half of the solid US Catholics in the 1980s wouldn’t have gone to conservative MegaChurches where they at least heard at least a sprinkling of the full-Gospel.  I mean, were the evangelical MegaChurches not affected by the sexual-revolution?  Of course they were.  Therefore, we tanked our own numbers in the Catholic Church by something very nefarious internally.

Over 2,000 years, the Catholic Church made well over one billion converts.  But shortly after Vatican II, the Western Hemisphere lost well over 50 million Catholics to either secularism or Protestantism.  Besides the obvious tanking of our own doctrine and liturgy at the Council, what are the other major lacunæ (holes) in the New Evangelization?  Perhaps a better title to this blog might be Why conservatives are losing the culture war against the liberals because—in full transparency here—I really don’t care about the “New Evangelization” anymore.  It’s not in my interest to see it succeed when I see the TLM-world evangelizing so much better.  (If you doubt this last sentence, look at the above two graphs.)

But in any case, here’s four of many lacunæ in the “New Evangelization” or in the conservative Catholic world as a whole: