Should We Sell Vatican Art for the Poor? 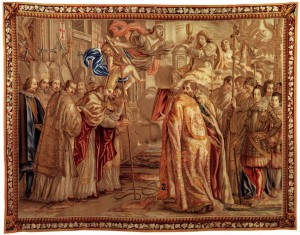 This actually isn’t a debate coming out of Rome these days (thankfully) but I write about it because most of you have heard this question from some family member or a person on a plane at one point.  Should we sell Vatican Art for the Poor?  Of course, my answer is “No,” but I want to give you some new answers for your friends.

2)  The Vatican doesn’t have as much money as you think.  Yes, the Vatican bank is in charge of $6 billion, but they don’t own it.  The Vatican’s annual operating budget is $300 million.  For a billion Catholics, that comes to 30 cents per Catholic.  In fact, the endowment of the Vatican is only $1 billion, where the endowment for Harvard University is $30 billion.  Considering there are only 30,000 students at Harvard, this means that there is an endowment for $1 million per current student.  No one is clamoring for their Cambridge campus to be sold!  Again, remember that the Vatican is operating a billion person organization on $300 million a year.

3) The poor deserve more than food.  A priest in Rome made my favorite point:  The poor of Italy have soul-needs just as much as they have bodily-needs,  and the Vatican has the rare gift of free art for the everyone to see with no admission price.  If we get rid of Vatican Art, where will the poor go to worship?  To see beauty?  To be inspired to seek God in their poverty?  Or do we just want to throw food at them and sterilize them?   Everyone has a need to live the transcendentals of the human soul (unity, beauty, goodness and truth.)  The poor need a place of free art, not just food.  Although the Vatican museum and the Sistine chapel cost to enter, Saint Peter’s square and Saint Peter’s basilica have an entrance that are gratis.

4) Judas and the body of Jesus.  Martha’s sister Mary actually spends an entire year of income to anoint Jesus’ body before He died!  Judas rebukes her in honor of the poor. Jesus then rebukes Judas: “It was intended that she should save this perfume for the day of my burial. You will always have the poor among you, but you will not always have me.”  1 Remember that the center of St. Peter’s Basilica is the  Eucharist, the resurrected and living body of Jesus Christ, God among us.  If billions of faithful, poor Catholics over 2000 years have wanted to give their blood, sweat and tears to honor the very body and blood of Jesus of Nazareth, who are we to overturn such a gift?  Only a modern day Judas would insist.  Indeed, since Jesus is truly present in the Holy Eucharist, then He deserves all the gold and honoring that humanity can muster.  St. Francis of Assisi said “Poverty stops at the altar.”  In other words, he believed priests should be personally poor, but that the accoutrements of the Holy Sacrifice of the Mass should spare nothing.

5.  The conformity of the soul to the building of worship.  The nine-minute video below was made by a young evangelical Protestant pastor.  In it, he explains that a Protestant Church conforms the place of worship to the extreme comfort demanded by the post-modern Christian.  But the Catholic Church conforms the soul to God.  His analysis is humorous and astoundingly accurate, except for his one historical error of saying that the Orthodox Church is older than the Catholic Church 2  In any case, the video below is worth it!