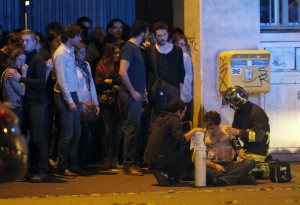 I’m about to go offer Mass for the 150+ victims of the Paris terror attack that has been claimed by ISIS.  The last time France has seen this much violence (besides abortion) was the French Revolution.  How unbelievably insensitive, then, of President Obama to quote the three key words of the French Revolution as the common source of resistance against terrorism:

“We are reminded in this time of tragedy that the bonds of liberté, egalité, fraternité are not just the values French people share, but we share.”—President Obama, 13 November 2015

So, if it’s true that the last time France saw this many murders was the French Revolution, then why has Obama quoted the three suspiciously-delightful red herrings of 18th century terrorism, namely,  liberté, egalité, and fraternité?  Any cursory look at history reveals that the French Revolution’s main goal was to kill as many practicing Christians as possible (one of the goals of ISIS, of course.)

It is all opening my eyes to see that the Apostle John was right: “Whoever has the Son has life; whoever does not have the Son of God does not have life.”—1 John 5:12.  In other words, there are only two sides to this spiritual war, and it is not European versus Arab or Republican versus Democrat.  It is life versus death.  Christians stand for life.  The French Revolution and Islam both stand for death.  Obama has made his colors known, yet again, in standing for the French Revolution and repeatedly overlooking (read: hiding) the goals of Islam.

The problem is that Christianity got lukewarm.  Islam did not.

Around 1900, people laughed at a French-English layman named Hilaire Belloc for predicting that Islam would try to take over Europe again.  Here is his prophetic insight from nearly 100 years ago:

“The story must not be neglected by any modern, who may think in error that the East has finally fallen before the West, that Islam is now enslaved—to our political and economic power at any rate if not to our philosophy. It is not so. Islam essentially survives, and Islam would not have survived had the Crusade made good its hold upon the essential point of Damascus. Islam survives. Its religion is intact; therefore its material strength may return. Our religion is in peril, and who can be confident in the continued skill, let alone the continued obedience, of those who make and work our machines? … There is with us a complete chaos in religious doctrine…. We worship ourselves, we worship the nation…Islam has not suffered this spiritual decline; and in the contrast between religious certitudes still strong throughout the Mohammedan world lies our peril.”—Hilaire Belloc