Nota Bene: The beginning of January was going to be for silent retreat, but I’m visiting a family member in the hospital. So, either way, there will be few blogs or podcasts for a little while. Please pray for us. 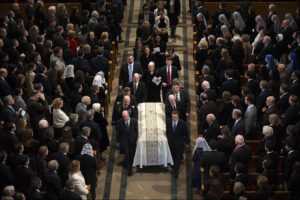 On 20 February 2016 (about seven years ago) I attended the funeral Mass of Justice Antonin Scalia.  The funeral Mass was preached by his son, Fr. Paul Scalia at the National Shrine of the Immaculate Conception in Washington DC (see both above pictures.)

After the funeral Masa, I went across the street in NE DC to have lunch with a Cardinal of South Africa.  I had set this up with his secretary in advance, with knowledge of his arrival in the USA.  Before that lunch, but after much prayer and study, I had decided that the best crossroads for stopping abortion and child-trafficking would be to start an orphanage.  Especially after learning how many orphans were addicted to drugs and living on the streets of South Africa, I decided that Africa was the perfect place—especially if a Cardinal of the Catholic Church from that continent was willing to listen to me.  Also, at the time, I had thought that that specific Cardinal was “very orthodox.”  He will remain unnamed.

The Cardinal knew what this lunch was about ahead of time.  He was very gracious in listening to my plan to start a Catholic orphanage in South Africa in his large city.  He told me about which drugs the kids on the streets were addicted to.  I am sure that I explained that at one point I was Vice-President of a Catholic recovery home on the West Coast for trafficked children.  I am sure I explained my involvement in the pro-life movement.  We probably discussed the passing of Supreme Court Justice Antonin Scalia, as I had just walked across the street from his funeral that afternoon in February 2016 in Washington DC.

Just as our lunch was wrapping up, I decided to save myself a flight to South Africa in case this forthcoming information was a “deal-breaker” so I told him (tah dah!) that I had recently switched to the Traditional Latin Mass and did all the old sacraments exclusively.

It was indeed an immediate deal-breaker with this relatively-conservative Prince of the Church that I did worship as Catholics have always done worship.  Surely this Cardinal of the Church who saw a great need to bring a Catholic orphanage to help shelter and catechize street-kids did not think that the Traditional Latin Mass would be more dangerous for these street-kids than all the drugs they were on?  Surely he wasn’t worried that the old sacraments were politically disadvantageous for his Archdiocese?  I don’t know, but I am quite sure he had no ignorance of Summorum Pontificum.

I guess you can chalk this blog post to yet another why-I’m-a-hermit-but tried-not-to-be whine session, but keep in mind that this event happened as I was leaving parish life.  This lunch with the Cardinal became another wake-up call to me that it was not so much that I was not welcome in parish life.  It wasn’t even so-much a manifestation that the traditional sacraments were unwelcome in parish life.  Rather, that lunch with the Cardinal that cold afternoon in DC was a manifestation (long before the current persecution) that Catholicism was no longer welcome in the mainstream hierarchy of the Catholic Church.  (Ironically, this “conservative Cardinal” had just criticized the liberal practices of Vatican at CUA a few days prior to my lunch, and I even attended his conference at CUA.  But, mysteriously he began defending the Vatican only a year later.  Had word spread?  Was he threatened?  I won’t know til the General Judgement.)

But if a putatively-orthodox Cardinal could not endure the notion of the old sacraments for a bunch of street kids who didn’t even know Christ, then we are truly in a worse global crisis than Arianism.

I am no St. Athanasius, but I think I can describe myself as someone who would be “an Athanasian priest,” at least if I lived in the 4th century.  In other words, I tend to think I could follow a saint in keeping to orthodoxy, even if I could not be one in the ascetical life of fasting and mortifying the flesh like him.  So, if we lived 1700 years ago, would an Athanasian-priest be upset if he were rejected by an Arian-bishop?  Of course not. That analogy might shake even some traditionalists reading this blog because it’s implying we traditionalists have nearly a different religion from the modernists.   But you-know-who recently admitted the Catholic Church “converted” at Vatican II!

I left the lunch again dejected and crestfallen, still thinking I could somehow mind-will a modernist hierarchy into caring about the salvation of souls more than their own political advance.  Perhaps I reproached myself for not fasting enough before the meeting.  But no amount of fasting would have convinced any Cardinal to let me use the TLM.  I’m actually glad that such a lunch was a failure, for my traditional doctrine would have got me sent packing back from South Africa all the way back home to the USA within a year.  There is no way a modernist Cardinal (however “conservative”) could take a traditional priest to save souls, just as there was no way that the Archbishop of Military Services could take a traditional priest (a conversation I would have with another bishop almost exactly two years after this potential-Orphanage lunch, also in DC, as relayed in this blog post.)

The Arians were out for their own advance, not for the advance of the Athanasian Creed.  So, when you realize modernism is truly as bad as Arianism, you then proclaim with St. Peter and the Apostles, “We must obey God rather than men.”—Acts 5:29.  I simply don’t care anymore if one bishop is a “liberal Arian bishop” or a “conservative Arian bishop.”  But I never should have believed I could infiltrate an infiltration in the first place during seminary.  That was my fault entirely.

Still, I now see that we can’t let modernists stop us from preaching traditional Catholicism, even if we can’t “mind-will” the hierarchy into orthodoxy if they choose to have a different Faith from that of the Apostles.  Only God can give each of us the gift of conversion.  And if Cardinals will not listen, maybe we should preach the old-school Faith of Jesus Christ to street-orphans addicted to drugs, anyway.