If I make it to heaven, I will probably lose the glory for any good work that I bragged about. At least that’s what seems clear when Our Lord says at the beginning of chapter 6 of St. Matthew: Beware of practicing your righteousness before other people in order to be seen by them, for then you will have no reward from your Father Who is in heaven. Thus, when you give to the needy, sound no trumpet before you, as the hypocrites do in the synagogues and in the streets, that they may be praised by others. Truly, I say to you, they have received their reward.—Mt 6:1-2.  But I also run a charity approved by Church and State, and you (my donors) probably need to know that your money goes to more than an internet ministry.  So, I’ll probably lose some (or all) of my meager reward for last night for this blog post, but you need to know what I do with my life, too. 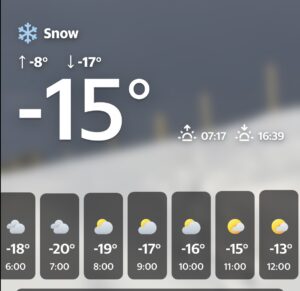 The above is the temperature today, and so last night my friend Micheal and I went out around Denver to see how to help the poor.  Denver looks like San Francisco these days with how many people live in tent cities.  Most the people downtown were contacted by the city government or the Coalition for the Homeless, but we went to the outskirts of the city where countless people were living in campers.  Surprisingly, we found numerous people who were living in campers and were willing to give us their empty propane tanks as we ran to Home Depot to give them full propane tanks for a night of —20º here in Denver.   We spent over $500 of my donors’ donations on propane tanks for people who would have either been without heat in their road-side campers, or at least needed back-up tanks.  We also handed out several hundred dollars worth of items including a warm sleeping bag, nice jacket, floor mat and many blankets and scarves. 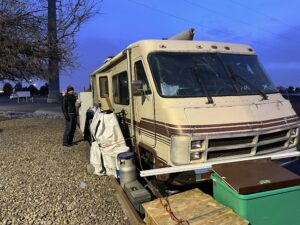 My friend Michael is an amazing evangelist, and every time I got cold and started moving quick with propane tanks or scarves, Michael reminded me (or did it himself) that each person needed a Miraculous Medal (and/or a blessing from me.) We worked for about four hours as the temperature dropped below 0, and we had only one person reject the offering of the Miraculous Medal.  (The only person to reject the medal was an older woman in her car who was anxious about two men approaching her—as well she should be after what looked like she had experienced a rough life on the streets.)  But most people were extremely gracious to receive the propane tank and Miraculous Medal. 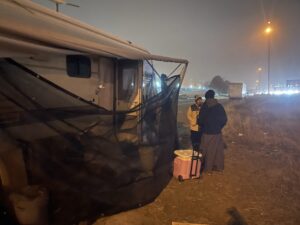 I realized doing this street ministry last night how many people in this country live in the extreme cold.  I told one couple living in their car without heat that they would die if they didn’t get to the Coliseum (opened up by the city of Denver last night for the homeless) or another shelter in —20º weather, as they had no apparent heat in their car.  This is why nearly everyone we spoke to accepted our offers of propane tanks, or a “Little Buddy” heater or at least very warm blankets.  It opened my eyes to how many blessings are in my life, and last night’s “run” around the East side of the city reminded me repeatedly of the abject poverty into which Jesus was born in that cave to Mary and Joseph.  I also realized how blessed (and spoiled) I am with so many gifts I do not deserve in life.

Nota Bene: The beginning of January was going to be for silent retreat, but I’m visiting a family member in the hospital. So, either way, there will be few blogs or podcasts for a little while. Please pray for us.