A Thanksgiving for Many Things

First of all, I want to thank from the bottom of my heart all of my listeners and readers, all of my benefactors—both material and spiritual.  We who raise our own funds as religious figures are often tempted to thank our spiritual benefactors just as much as our material benefactors—but only as a show to keep the financial donations coming.  Not me anymore.  I have faced enough spiritual attack since my ordination in 2010 that I can not tell you how much more I need prayers and novenas and Masses and especially your fastings even more than financial donations.

Still, I am extremely thankful for both groups of donors.  All of you make my life of prayer and teaching possible.  We priests who are called names for being too traditional especially thank you for knowing where your donations go, especially in light of more news from groups like the Lepanto Institute continuing their revelations that normal diocesan collections are still going to the CCHD, which even funds groups that support so-called “reproductive freedom” and alphabet-soup agendas against the traditional family.

In happier news, some of you might remember an earlier Life Update Blog post I wrote called Four Reasons for Hope in which I reference a talk by Fr. Ripperger called The Sixth Generation.  In that blog post, I mention that “at time stamp 47:00, Fr. Ripperger explains, ‘When you look at some of the kids coming up now in the sixth generation, they’re starting to show extraordinary signs that we haven’t seen in millennia almost… I know a child that started meditating at the age of five on his own.  I have seen children as early as seven and eight years of age start fasting on their own… and they can suffer phenomenally; it doesn’t seem to phase them.  You’re starting to see they have a particular kind of grace where they’re able to quickly see the truth of the doctrines and when something opposite is proposed to them, they just think it’s preposterous.  God is preparing a Catholic revival.  I think He’s preparing it.  You can see it.  The grace is there.'”

This autumn, I have travelled a little bit and seen the same thing in certain families.  Recently, I spoke to a ten and a twelve year old between dinner and desert when their parents were clearing the table at which we were seated.  I could not believe the intensity and accuracy with which they wanted to ask me theological questions.  They were not showing off nor playing to my ego.  They actually couldn’t care less who I was.  They only wanted the hard-core, cold-cut theological answers to their questions to the crisis in the Church.  Even I was a bit too sheepish to answer these unfiltered dogma questions until their parents (both younger than me) gave me approval to proceed.  I felt like I was talking to a future St. Ignatius of Loyola and a future St. Francis Xavier.  Too many people say that such zeal needs to be tempered.  Rather, we know from the lives of the saints it must be directed (not stifled.)

But as I thought of those two young boys entering religious life, I was quite dismayed.  Where could such angels of fire ever find a place in any religious order with all traditional orders getting squashed?  But later, I cheered up, because here is how I see God’s punishment going-down in this current unprecedented crisis in the Church: The Vatican is currently “finishing off” the faith of the modernists, so to speak.  They are not harming the traditionalists, as they themselves believe.  The wonky hierarchy is euthanizing the weak in faith (that is—the heterodox—not the “weak” as people see St. Therese of Lisieux.)  Perhaps in God’s eternity, this is so that a new generation of strong Catholics can take their place.  It’s actually all great news what is happening in Rome and via chanceries across the globe. 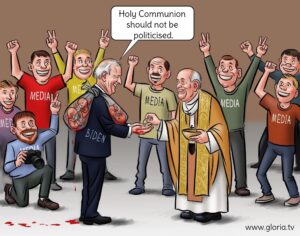 Why would anyone who believes God-the-Son is simply “the privileged route” (not the only way) to God-the-Father send their sons to be missionary priests?  Obviously, they wouldn’t.  But see—that’s the point of ecumenism.  It’s to sink missionary work since ecumenism is just code for the heresy of religious indifferentism, which is code for any ole’ religion saving you as long as you’re “following your conscience.”  Obviously, Jesus did not die and resurrect for such a heresy to exist.

Thankfully, leftist Catholics are self-selecting themselves out of the future of Our Church, not only due to things like contraception, but even due to things like ecumenism.  If everyone goes to heaven with or without Catholicism (as most US bishops claim) then why would anyone want to be Catholic instead of Methodist or Buddhist?  There’s a few reasons, but they aren’t very strong.  And so, more and more of the kids of liberal Catholics will continue to (unfortunately) repulse the Faith of Jesus Christ.  But the families who have kids who truly care about the salvation of souls (as seen in two paragraphs up) are going to be the future of the Catholic Church.  Again, the liberals are self-selecting themselves out of the Church not just by means of their broken physical reproduction, but even by their rejection of spiritual reproduction in their silly acceptance of things like ecumenism.

For this, I am very thankful.  Not because I’m thankful that anyone in or outside the Church is rejecting Apostolic Catholicism.  But I am very thankful that those traditional Catholics who are zealous for God’s glory and the salvation of souls (in Christ Jesus, alone!) are finding each other online and in-person, in parishes and in their supermarkets.  The hierarchy has forgotten that strong Catholics are like flowers that spring up in BS, er, I mean, fertilizer.  And by strong, I don’t mean the opposite of the childlike way of St. Therese.  I mean exactly the courage of St. Therese, who once wrote, “What does it matter if we have no courage, provided we act as though we were really brave?”  Such are the flowers I see springing up in families, even as tons of fertilizer is thrown their way from both leaders in Church and State. 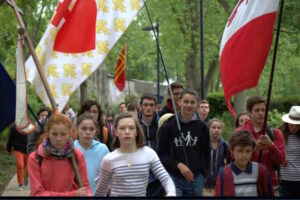