Then the mother of the sons of Zebedee came up to Him with her sons, and kneeling before Him she asked Him for something. And He said to her, “What do you want?” She said to Him, “Say that these two sons of mine are to sit, one at Your right hand and one at Your left, in Your kingdom.” Jesus answered, “You do not know what you are asking. Are you able to drink the cup that I am to drink?” They said to him, “We are able.” He said to them, “You will drink My cup, but to sit at My right hand and at My left is not Mine to grant, but it is for those for whom it has been prepared by My Father.” And when the ten heard it, they were indignant at the two brothers. But Jesus called them to Him and said, “You know that the rulers of the Gentiles lord it over them, and their great ones exercise authority over them. It shall not be so among you. But whoever would be great among you must be your servant, and whoever would be first among you must be your slave, even as the Son of Man came not to be served but to serve, and to give His life as a ransom for many.”—Mt 20:20-27

“Their great ones exercise authority over them.”—Mt 20:25

The words “great ones” above are translated from one Greek word, μεγάλοι, spelled in the Latin alphabet as megaloi.  Obviously, that word looks a lot like our English word, megalomaniac.  And what did Jesus say the great ones of the Gentiles do to others?  He said they κατεξουσιάζουσιν (katexousiazousin) them.  This is translated in my Greek dictionary as “exercise authority, tyrannize.”   Combine all of this, and we might say that a modern translation (admittedly using a little loose style of a transliteration) could be:  “These megalomaniacs tyrannize them.”

Reading this in the Greek this week obviously caught my attention, precisely because we have so many megalomaniacs tyrannizing others with unprecedented authoritarian measures across the globe in the name of “health” and “safety” and “safe-spaces” and “fighting white-supremacists.”  Of course, the people pushing liberal totalitarianism are not helping to end any virus or any racism (as they have no problem with Planned Parenthood of America killing literally most of black babies who are conceived.)  I have studied enough world history and Church history to know that never in the history of the world have megalomaniacs in Church and State attempted to tyrannize so many normal people.  (And the funny thing is that it is entirely leftists tyrannizing those on the right, and then making themselves to be the victims as diabolical narcissists always do.)

Do I sound angry? Well, I am. But Christ’s answer to these tyrannizing megalomaniacs equally jarring when I read it in the Greek yesterday, even though I had read it many times in English.   Let’s look at the English, first:

“It shall not be so among you. But whoever would be great among you must be your servant.”—Mt 20:26

Here Christ’s word for great (μέγας=megas) in an interesting play on the plural (μεγάλοι=megaloi) that was used in verse 25 as seen above about who tyrannizes others.  But Christ obviously here uses these words in an ironic—or at least unexpected manner—insofar as He shows as those who want to be “mega” must not tyrannize others but become a servant (v. 26=διάκονος=diakonos) or even a slave (v. 26=δοῦλος=doulos.)

You may notice above that the word in verse 26 above, διάκονος, means servant.  It is where we get the English word “deacon.”  I had heard at one point that “deacon” in Japanese was Samurai, but my research this week turned up nothing on that front.  However, I did find a very interesting etymology to Samurai in the Japanese language…

Spiritual Samurai to Fight the Tyrannizing Ones 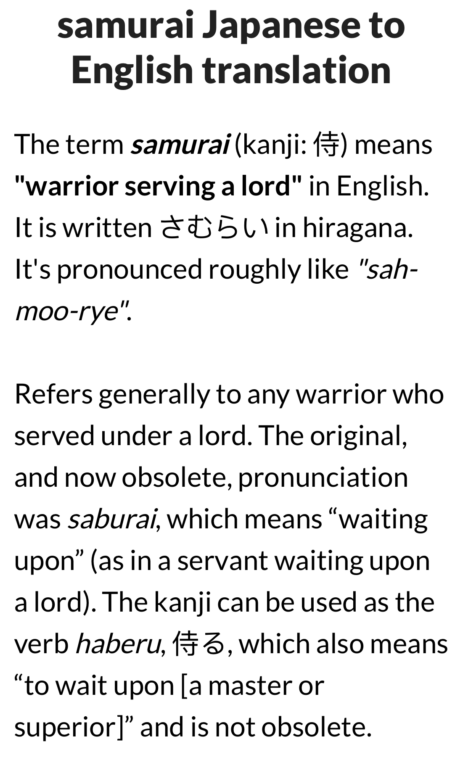 The notion of a warrior “waiting upon his lord” obviously elicits the thoughts of how many times in the Old Testament we read that the key to the life of a good Jew was to “wait on the Lord” and then (and only then) act by “obeying the Lord.”  We type-A personalities often see the notion of “waiting on the Lord” as way too passive, especially as many of the would-be watchmen of the New Israel choose to let her sheep get fed to false-shepherds and wolves.  But for people like me who are too quick to act, this gave me great pause that a warrior can be a servant and that a warrior can indeed “wait on his lord.”  Of course, for us Christian, we find that imperative put in capital letters:  The true slave of Jesus Christ or samurai in the spiritual-life will “wait on His Lord.”

And then such a Christian man or woman will obey by first worshipping the Trinity the right way and secondly living as a servant or slave in service to his own brothers and sisters.  This is one way how we become the great ones to conquer in charity over the great megalomaniacs of the world trying to tyrannize us.  Of course, this doesn’t mean that we capitulate at the exterior level when the day comes that we must defend our innocent ones physically, but it does mean that we become samurai-servants at the spiritual level now.