How Many Will Be Saved?

Hugh Hefner died today, and even bloggers like Fr. Dwight Longenecker at patheos are promoting a very different attitude towards Hefner than the tradition of the Catholic Church.  I don’t know where Hefner is any more than Fr. Longenecker, and I’m not saying Fr.  Longenecker has a theology that is wrong,  but his attitude towards heaven and hell is very, very different from that of Jesus Christ in the New Testament and the saints in every century.

I don’t have a better insight than any priest, but I do know that we simply need to return to the Deposit of the Faith in both Scripture and Tradition to find what is taught De Fide (by defined dogma.) Even most of my faithful readers will be surprised to read that we can know De Fide that hell is not empty.  We will look first at public revelation and later private revelation, as only the former is De Fide.

Of course, Jesus “desires all people to be saved and to come to the knowledge of the truth”—1 Tim 2:4, but the problem is not in the heart of God. God wills even the worst sinners to be saved. The problem is Satan who has tricked us into original sin and actual sin to the point that we refuse the Divine Rescuer, Who, please God, will never say to us: “I never knew you; depart from me, you workers of lawlessness.”—Mt 7:23.  Obviously, the first answer to all of this is to know Jesus Christ intimately.  If we do come to know Him, we will be led to the same love of God and fear of God that we read below in the lives of the saints.

But first, the Council of Trent, an infallible council of the Catholic Church gives a definitive statement on whether hell is empty or not: “But though He died for all, yet all do not receive the benefit of His death, but those only to whom the merit of His passion is communicated; because as truly as men would not be born unjust, if they were not born through propagation of the seed of Adam, since by that propagation they contract through him, when they are conceived, injustice as their own, so if they were not born again in Christ, they would never be justified, since in that new birth there is bestowed upon them, through the merit of His passion, the grace by which they are made just.”—Council of Trent, Chapter 3, Session 6, 13 January 1547 under Pope Paul III.

Therefore, no one can say: “The Church admits that hell exists but we don’t know if anyone is there.” (Fr. Longenecker never wrote this, but I hear it all the time from priests and modernist theologians.)  But such a statement would indeed be a material heresy, considering that the Council of Trent infallibly stated that “not all receive the benefit of His death.” (It would be a formal heresy to say such a thing after reading this blog post!)

Let us look to what has been referred to as “The Magisterium of the Saints.” The “Magisterium of the Saints” is not as De Fide (defined dogma of the faith) as the above quotes from inerrant Sacred Scripture or an infallible council like Trent. However, those canonized men and women had to be found nearly flawless in their theology to be canonized. Furthermore, the canonized saints’ private revelations of the afterlife have to be pretty spot-on to make the honors of the altar. As far as visions of the afterlife in the following quotes from the saints, you will notice how many saints give actual percentages as to how many are saved, and ask yourself if Hugh Hefner showed any signs of being in these numbers below:

These quotes come from Fewness of the Saved Saints’ Quotes, a post that contains 101 quotes describing the population of heaven versus hell, at the writing and description of only canonized saints. Honestly, I hope those numbers are wrong, but I can no longer say that the above saints are “Jansenist” or “sedevacantist.”  I can no longer claim that those quotes are “Jansenist” or “sedevacantist” because those quotes span 2,000 years, coming from saints in the East and the West, long before the advent of either of those errors.

Again, I don’t know if Hugh Hefner is in purgatory or hell, but I have a pretty good guess, and I do no one any favors by promoting this presumption that Hugh having a last-minute emotional movement to have a sweet thought about God can erase 50 years of oppression of women and getting half the globe of men addicted to pornography.  Yes, I have a pretty good guess where such a man resides.  God could have forgiven all of his sins by repentance, baptism or confession.  But there’s no evidence that Hugh wanted any of those.  No, I don’t know for sure, but I’m going to follow a preponderance of evidence.  I write this post not to rip on Hefner, but to bring sobriety to the living that God can forgive any sin in the confessional, so go to confession.  1

Finally, Fr. Longenecker mentioned Divine Mercy, and I agree that next to the Bible, there is no greater written revelation of the Love and Mercy of God than the Divine Mercy Diary of the 20th century nun, St. Faustina of Poland. 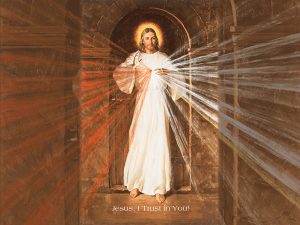 But he left out the part where St. Faustina was also given a vision of a highly-populated hell so that people might understand that we face a populated hell and that this aspect of Our Faith is an intricate part of what Divine Mercy saves us from.  In the Divine Mercy Diary, St. Faustina had to describe the human souls already in hell:

Each soul undergoes terrible and indescribable sufferings, related to the manner in which it has sinned. There are caverns and pits of torture where one form of agony differs from another. I would have died at the very sight of these tortures if the omnipotence of God had not supported me. Let the sinner know that he will be tortured throughout all eternity, in those senses which he made use of to sin. I am writing this at the command of God, so that no soul may find an excuse by saying there is no hell, or that nobody has ever been there, and so no one can say what it is like. I, Sister Faustina, by the order of God, have visited the abysses of hell so that I might tell souls about it and testify to its existence. I cannot speak about it now; but I have received a command from God to leave it in writing. The devils were full of hatred for me, but they had to obey me at the command of God. What I have written is but a pale shadow of the things I saw. But I noticed one thing: that most of the souls there are those who disbelieved that there is a hell. When I came to, I could hardly recover from the fright. How terribly souls suffer there! Consequently, I pray even more fervently for the conversion of sinners. I incessantly plead God’s mercy upon them. O my Jesus I would rather be in agony until the end of the world, amidst the greatest suffering, than offend You by the least of sin.—St. Faustina, Divine Mercy Diary 741

Notice again that according to Jesus’ revelation to St. Faustina, “most of the souls [in hell] are those who disbelieved that there is a hell.”  We can conclude in all fairness that the same destiny awaits the souls of clerics and theologians who lead lay people to the same practical conclusion (even if not theological error) by teaching them: “There is a hell, but we are not sure if anyone is in it.”  2