Were the Apostles Buffoons before Pentecost?

I must admit that there is something attractive and even accurate to the thesis that the Apostles were buffoons before they had the full transformation that happened at Pentecost.  First, Mother Angelica points out that they never seemed to catch anything on their own even as fishermen!  “Jesus chose a bunch of stinky fishermen” she reminds us as to why God chose someone like her to be a cloistered-evangelist to the nations in founding EWTN.

We have Christ’s disciples’ obvious sins, like Peter’s threefold denial of Jesus.  And yet, after the Resurrection, Jesus does not say “Peter, about denying me three nights ago…You can still remain my disciple, but I’m going to have to pass-along this whole first-Pope thing.”   No.  After the threefold denial, Jesus gives Peter on that Sunday beach of the resurrection a full three attempts to move from simply liking Him (φιλεῖς με)  to actually loving him (ἀγαπᾷς με.)  Peter is embarrassed that he can’t honestly answer that he had any form of unconditional love for his friend who just died for him.

Jesus sees Peter’s humility and is not worried.  Our Lord simply says: “Tend my sheep” and “Feed my sheep.”  He knows that Peter will live up to the task.  Peter had trusted in himself and fallen hard.  But now, Peter is humbled enough to lead the Church…and Peter himself would be led to a cross where he would one day die, believing he was not worthy to die in the same shape as the Son of God.  His executors agreed, and turned him upside down.

But it wasn’t just their bad fishing skills or their sins that made the Apostles look like buffoons.  Without any blasphemy to the saints (and yes, the saints can be blasphemed) the evangelists made it clear that the Apostles occasionally answered as buffoons:

Jesus said:  “Our friend Lazarus has fallen asleep, but I go to awaken him.” The disciples said to him, “Lord, if he has fallen asleep, he will recover.” Now Jesus had spoken of his death, but they thought that he meant taking rest in sleep. Then Jesus told them plainly, “Lazarus has died.—John 4:11-14

Come on.  Really.  They thought that Jesus Himself didn’t actually know that asleep people wake up?  Apparently not.  No other explanation suffices.

or consider how obtuse they are later on the boat:

And [Jesus] cautioned them, saying, “Watch out; beware of the leaven of the Pharisees and the leaven of Herod.” And they began discussing with one another the fact that they had no bread.—Mark 8:14

I can hear Homer Simpson saying to Chief Wiggum “I understaaaaand.”   Yes, they were apparently thinking about food when Jesus said something as spiritual as “Beware of the leaven of the Pharisees.”  This paints a picture of men astoundingly obtuse to the spiritual sense of things.

But now I want to consider some evidence that the Apostles were not buffoons.  First of all, of all Ancient Near-East nations, very few tribes were as literate as the Jews in the first century.  Children began memorizing the torah with honey on the letters at very tender ages.  In fact, they had a large part of the Hebrew Scriptures memorized by the time they were 12 years old.  We live in a time when most priests can not even name the seven gifts of the Holy Spirit, so we tend to project our poor catechesis on the Apostles.  But the Apostles would have know the Jewish faith, salvation history and the Hebrew Scriptures through and through and through, long before they met the Son of God face-to-face.  This is a historical reality, not a pious hope.  Just ask any well-read Israeli about first century life out there.

The Apostles were fishermen by trade.  But originally they had “tried out”(like all 12 year old Hebrew boys at one point) to become a rabbi.  This happens by being chosen at the age of 12 or so by a rabbi to be one who learns from him for years.  Many years earlier, the Apostles had probably tried out but failed.  But they had failed only compared to the real brainiacs of the day.  This means that the Apostles would have had a large chunk of the entire Old Testament memorized long before they took their consolation prize of fishing (irony of ironies, considering which rabbi ended up choosing them as adults.)

But now let’s fast forward to some grown Apostles:  Peter’s brother is Andrew, and today is the feast of St. Andrew (30 November).  The above picture is him instructing one of his early disciples, assumedly in modern-day Turkey.  Similarly, it was Andrew who first introduced his brother Peter to Jesus Christ:

One of the two who heard John speak and followed Jesus was Andrew, Simon Peter’s brother. He first found his own brother Simon and said to him, “We have found the Messiah” (which means Christ). He brought him to Jesus.—John 1:40-42b

What was Andrew doing before he brought Peter to Jesus?  Although Andrew may not have gone to sit from a rabbi in one of the main yeshivas (schools,  ישיבה, literally meaning “sitting,” as  you sit at the foot of a rabbi) we often forget that he was already following the greatest prophet of the old and new Testaments:  John the Baptist.  John the Baptist was not Jesus’ schizophrenic cousin in the forest like some movies portray him to be.  John the Baptist is he of whom Jesus said “No man born of woman is greater than him.”—Matthew 11:11.

Notice two paragraphs above that Andrew introduces Peter to Jesus very very early in John’s Gospel.  In fact, it happened in chapter one!  How do we know that St. Andrew was already following St. John the Baptist before meeting Jesus?  Because just a few verses before that, Andrew follows Jesus at the very referral and command of John the Baptist (Andrew’s first own master and rabbi) to do so.  Notice that this happens just before what I described two paragraphs above:

The next day again John was standing with two of his disciples, and he looked at Jesus as He walked by and said, “Behold, the Lamb of God!” The two disciples heard him say this, and they followed Jesus.—John 1:35-37.

Can you imagine those three years of walking next to Jesus under a tree and eleven annoying-but-beloved friends?  They must have wondered:  What would Jesus say next?  Where would He lead them?  What miracle would come next?  Which Pharisee would He anger today?  Life would have been pure adventure.  And yet, and yet…after the crucifixion, they are left with little faith.  Those Apostles are hiding out for fear that they will be the next crucified Galileans, after their master and rabbi was mercilessly tortured and laid in the earth.  Some messiah to liberate Israel from Rome!

But after they experience the Risen Christ, everything changes.  They now believe.  I believe that the greatest proof of the Resurrection is that 11 fearful men, literally hiding from the authorities on the first Holy Saturday, are the same men that traverse the globe and are now responsible for the fact that there are 2 billion Christians on the earth.  How else could Galilean fishermen have gone from as far West as Spain (St. James) and as far East as India (St. Thomas) if they had not stuck their fingers into the nails of the Risen Jesus or the fist into His side?  They were truly transformed.  (Oh, and some say that Thomas made it all the way to China, but I won’t weigh in on that here.)

They have perfect knowledge of Christ at the resurrection, but the perfection of charity comes at Pentecost with Mary at their side, giving them all boldness and miracles to begin the full transformation of the world!  So, yes, I do believe that there was a transformation in the lives and hearts at the Resurrection and even more at Pentecost.  Perhaps even the personalities of the Apostles after the Resurrection and Pentecost are a bit changed.  Either way, grace perfects nature without destroying it.

Because of this, we can be encouraged by the many falls of the personalities of the Bible when we consider how faithful God is to us, even when we are not faithful.  Not that we want this to lead to presumption on God’s mercy, but St. Therese said:  “It doesn’t matter how many times you fall.  Only how many times you get back up.”  In fact, this is truly exemplified in the many stupid decisions of the Apostles before Pentecost, and how Jesus does not only refrain from retracting His love, but He doesn’t retract His friendship, either.  In fact, even their leadership as bishops and Pope of the early Church remains untouched despite all their personality flaws (impetuous, hungry, sleepy, dull, angry, etc) much like what you encounter in priests today, even in the confessional!  As long as they kept the true faith and transmitted it as Christ gave it, falls among the first bishops and pope could be endured.

But we also have to put together the facts to see that the Apostles were not buffoons before Pentecost. They came from arguably the most literate culture ever on the fact of the globe (the Jews, even under occupation) and had memorized more books of the Bible by the age of 12 than most American Catholics will even read in the Bible their whole life.  They were following the second greatest prophet to walk the earth, St. John the Baptist, before they were instructed on the beach by Yahweh Himself for three years, long before Pentecost.  So, yes, the Apostles made some stupid comments in the Gospels and even some serious sins, but they were the most highly-educated fishermen that you ever did meet. 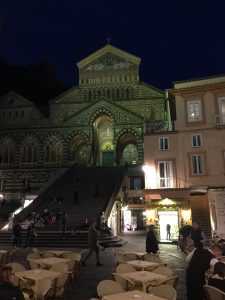