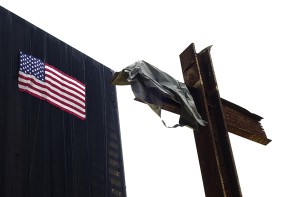 Bear with the background story before a bit of a show-stopper.

My good friend Msgr. Philip Reilly, founder of Helper of God’s Precious Infants is my hero of diocesan life.  This Irish priest from NYC fasts all day (until 5pm) in front of an abortion mill in Brooklyn.   God has closed over 60 abortion clinics due to his work.  He trained the Franciscan Friars in sidewalk counseling.  They believe he’ll be canonized (literally, not figuratively.)   This man lives all three munera of the priesthood to the maximum!  (See my last post to get that one.)

In any case, he was in front of an abortion clinic in Brooklyn when he could see the towers in Manhattan go down 14 years ago today.  Msgr. Reilly had a priest friend in lower Manhattan at the time, and this is a little known (but true) Catholic story from this day in American history:

Before the firefighters went into that burning building to try to save a few fellow Americans, one of those men saw this priest-friend of Msgr. Reilly.  He said to him:

“Father, I think this fulfills the requirements

for a general absolution.”

Father agreed.  All 50+ men got on their knees.  All men received absolution.  All men stood up and went into the tower.  Every one of those firefighters died that day for our country.

These may not be Christian martyrs at the hands Islam, but they laid down their lives as Jesus said: “Greater love has no one than this, that someone lay down his life for his friends.”—John 15:13  Having received general absolution, and dying for our country—I bet every one of them was saved by Jesus at their particular judgment.