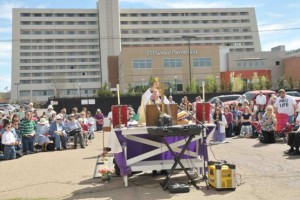 When I was sidewalk counseling at an abortion clinic last Friday, it hit me that it’s good that there’s actually a few priests and bishops speaking out against Planned Parenthood, but there’s still something worse than abortion.

“For no crime is there heavier punishment to be feared from God than for the unholy or irreligious use [of the Holy Eucharist.]”—Council of Trent, De Euch v.i., 16th century.

Of course, the interior state of a person who is receiving Holy Communion can never be judged by another, especially based on exterior indications.  However, a priest or a bishop who publicly tramples the rubrics of his rite commits a public act of sacrilege, calling down upon him “the heaviest punishment to be feared from God.”  (ibid.)

1) “When Holy Mass is celebrated for a large crowd – for example, in large cities – care should be taken lest out of ignorance non-Catholics or even non-Christians come forward for Holy Communion, without taking into account the Church’s Magisterium in matters pertaining to doctrine and discipline. It is the duty of Pastors at an opportune moment to inform those present of the authenticity and the discipline that are strictly to be observed.”—Redemptionis Sacramentum 84

2) “The chalice should not be ministered to lay members of Christ’s faithful where there is such a large number of communicants that it is difficult to gauge the amount of wine for the Eucharist and there is a danger that more than a reasonable quantity of the Blood of Christ remain to be consumed at the end of the celebration.”—Redemptionis Sacramentum 102

3) “Only out of true necessity is there to be recourse to the assistance of extraordinary ministers in the celebration of the Liturgy.”—Redemptionis Sacramentum 151

4) “If there is a risk of profanation, then Holy Communion should not be given in the hand to the faithful.”—Redemptionis Sacramentum 92

Is there a big enough chance the Eucharist would be profaned that would justify the switching of an entire parish or diocese from Communion in the hand to exclusively Communion on the tongue? First of all, a bishop once told me he believes 80% of those who received Holy Communion in his diocese received Holy Communion in a state of mortal sin.  I’ll never forget that number that he told me.  That right there is enough profanation to demand exact and immediate obedience to the rubrics of the Liturgy:  New Mass, Old Mass or the Byzantine Divine Liturgy.  This is because a priest doing the right thing automatically engenders worthy communions among the laity.

When a bishop preaches against a Satanic Mass that takes place in his diocese, that’s great.  But where did the Eucharistic host come from destined for sacrilege?  This answer I can give with 99% surety:  The consecrated Host came from a Mass in that same diocese where the satanist took Holy Communion in the hand from a lay Eucharistic “minister” who was quickly smiling at the next person in line…while Our Lord was being taken to a new crucifixion in unspeakable rituals…literally unspeakable satanic rituals which are as evil as abortion.

So what is the excuse for ignoring God’s law?  Because no one else is following it.  But this will not exonerate us at the Final Judgement, especially since Rome was so clear after Vatican II, not to mention all the binding documents prior.  Even common sense dictates that we must end this sacrilege against God in the Eucharist, especially if we are to simultaneously beg God to end the scourge of abortion—something only He can do—not the Republican party.

This rejection of God’s holy law is why Bishop Athanasius Schneider has called this the fourth greatest crisis in the history of the Church.  His namesake shows that there is precedent in Church history for global blindness even among the clergy.  The core of every crisis is when priests fear man more than God.  The same is true for this crisis of the 21st century.  The only difference is that we have dubbed our current fear-of-man to be “pastoral charity” instead of “Arianism.”

The specific four instructions that I quote in Redemptionis Sacramentum were given by the Church nearly forty years after Vatican II.  All are to be enacted within the new Mass of the vernacular (i.e. English or Spanish in the USA.)   I can’t stress enough that it was released in 2004, not 1604.  Nor is Redemptionis Sacramentum a frilly tidbit of devotion for more pious priests.  Why do I say this?  Again, the above four quotes are examples of the bare-minimum.

Pastors and bishops can stop 99% of Satanic Masses (and probably reduce the more common sacrilege of people showing up to Mass in 6″ shorts) by enacting Redemptionis Sacramentum, for this document clarifies that it is our duty to eradicate the reception of Holy Communion in the hand in any danger, even in the Mass of Vatican II, for the highest authorities have spoken on this topic: “To touch the Sacred Species with their own hands and to distribute them is a privilege of the Ordained.”—Pope St. John Paul II, Dominicae Cenae.

(The above tenets are all “givens” in the Traditional Latin Mass that you see pictured in the above photo with a priest-friend of mine in front of a Planned Parenthood.   It’s the only Mass I offer now, too.)

We should return to my original topic:  What does obedience to Redemptionis Sacramentum have to do with ending abortion? Read Exodus 25 and Exodus 26.   The chapters contain God’s instructions to Moses regarding Divine Worship.  The Ark and the Tabernacle had to be fabricated exactly as God said—down to the centimeter.  In Exodus 25-26, following the “legalistic rules” of worship does indeed come before social justice.   Hence, in the New Covenant, for “no crime is there heavier punishment to be feared from God than for the unholy or irreligious use [of the Eucharist.]”—Trent.   Redemptionis Sacramentum is a lot easier to follow than Trent, and yet it’s still being ignored by “conservative” pastors.  If we eschew the minimum of God’s request on worship, how can we ask Him to end abortion?

In fact, any priest or bishop who preaches the hard truths of marriage while not fulfilling the minimum found above in Redemptionis Sacramentum may be the very person Jesus spoke of when He said: “You load people with burdens hard to bear, and you yourselves do not touch the burdens with one of your fingers.”—Luke 11:46.  So-called “conservative” pastors are often the worst culprits in persecuting the few priests and laity who wish to hold to all of Redemptionis Sacramentum.   At least, I have to honor the “progressives” for their consistency:  They don’t hypocritically pretend to fight the Unborn Holocaust or this Liturgical Holocaust.  Some even have genuine zeal for their own pet-projects.

I don’t think we priests can sincerely ask God to end the Unborn Holocaust until we have collectively become obedient to Him in ending this Liturgical Holocaust.  It would cost us little more than short-lived popularity.  Until then, it may be costing unborn babies their lives. 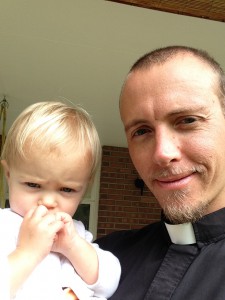