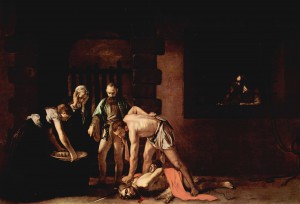 A friend of mine who is a beautiful wife and mother of seven children was in a supermarket this week.  A 50 year old man stopped her and then sarcastically asked her if she knew what “caused” having seven kids. She texted me about this and then added her and her husband’s thoughts on this:

Some days the world just wears you down and a part of you starts to feel like maybe you are a freak. Not just about having a lot of kids, but about everything. And then you realize you need to spend some time in adoration and start to once again see life through Jesus’ eyes and not the world’s. The world is so blind and hard-hearted that what is beautiful and sacred just can’t be comprehended by it.

Why is the world so hard-hearted to Christians today?

As I said earlier, it’s not because we’re being hateful on issues of sexuality.  So why do Catholics constantly get mocked for following Christ and His Church in the silence of their homes?  Is it because they’re secretly judging their neighbors and everyone feels it?  Maybe…but I think today’s feast of the Beheading of John the Baptist can shed light on the psychology of the conviction of conscience.

Now, there’s a lot of Herods in the Bible but I want to consider Herod Antipas (20 BC-AD 40), the tetrarch of Galilee and Peraea.  He’s the one who mocked Jesus before His execution. He’s also the one who ordered John the Baptist’s death for having spoken out against his adulterous relationship.

Now, most Bible movies do a pretty good job at capturing the love/hate relationship between Herod and the Baptist because of this one very rich line in the Gospel: “Herod feared John, knowing that he was a righteous and holy man, and he kept him safe. When he heard him, he was greatly perplexed, and yet he heard him gladly.”—Mark 6:20

I believe it was Earnest Hemingway, an unbeliever, who liked to travel the Deep South of the USA and listen to fire and brimstone homilies in Baptist Churches. Apparently it made him feel alive, or at least he heard these homilies “gladly.”  This curiosity was also found in Herod.

But of the 2.5 million people populating first century Palestine, why would a somewhat-powerful governor like Herod move beyond curiosity towards the murder of a homeless man who had been calling him out for living with his brother’s wife?   I mean, really—2.5 million people are silent about his adultery, and then one guy who is half-dressed in skins and eating crickets calls this magistrate out for a sexual sin many miles away on the Jordan River and Herod panics? What exactly got under Herod’s skin? Or better, what gets under Herodias‘ skin? The answer is that they secretly recognize John the Baptist as the mouthpiece of the one, true God they are running from.

As I wrote in a post called Mercy Killing of Consciences:
You see, if the final exterior agent of traditional Judeo-Christian belief (the Catholic Church) reflects the interior-but-objective, flickering, dying pilot light of your conscience that you’re trying to kill, then the Catholic Church is the one thing that is keeping your conscience alive…and you hate it. This is because long before rules were found in the catechism, they were found in your heart.

That’s why Obama wants to stop the Little Sisters of the Poor in the HHS mandate .  That’s why a 50 year old man in a supermarket harasses a young mother of seven.  Both bullies know that that’s how they should have lived.  If  you think this is an exaggeration, then what other explanation would there be for them to go out of their way?  It has to be personal conviction of conscience at how others silently live their lives for God:

“Let us lie in wait for the righteous man, because he is inconvenient to us, and opposes our actions…the very sight of him is a burden to us, because his manner of life is unlike that of others, and his ways are strange.”—Wisdom 2:12a, 15

I don’t know that supermarket stalker’s past, but statistically an American man of his age has already paid for one to two abortions, not to mention one or two dozen dead children from several decades of abortifacient-pills-induced sex.  I don’t know this guy’s conscience, heart or past, but I’m just saying statistically this is the truth for an American male of his age.  (Do the math if you want.)  Of course he’s going to feel convicted by a Catholic woman who lived the way he should have.  His conviction came out as sarcasm.  Herodias’ came out as murder.

There’s only one truth of how humans should live, and it’s entirely found in the Catholic Church, so we should probably stop apologizing so much.  Yes, it’s true that we Catholics lost a lot of credibility in the priest scandals of the past 50 years that destroyed so many lives, and for that we do need to keep apologizing.  But the Truth remains on walking billboards like my friend in the supermarket.  She and many others are heroes and white martyrs of marriage, like John the Baptist was a hero of marriage carrying his red martyrdom in the picture above.  They’re both formidable Marriage Defenders:  one married, and one celibate.

I wasn’t so clear on this at first.  Yesterday, I texted my friend back that I would have punched that a** in the face if I had been there in King Soopers. 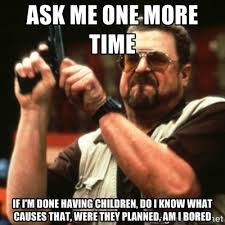 Later, I realized that creeping behind that broken old creeper’s sarcasm was probably a hunger and even sadness for the family he had contracepted away.  In the face of such brokenness and/or hostility (only God knows) it can still make us wonder how to act.  Here’s my suggestion: Catholics are not called to act like weird-o-cult people who act strange in order to appear holy.  But we are called to live normal, fun lives in a way that seeks Christ fully, especially in the Eucharist and in the daily Rosary.  Doing simply that may make others say of us:  “The very sight of him is a burden to us, because his manner of life is unlike that of others.”

Once we boldly but humbly accept the fact that our manner of life is unlike that of others, then it’s easy “to speak evil of no one, to avoid quarreling, to be gentle, and to show perfect courtesy toward all people. For we ourselves were once foolish, disobedient, led astray, slaves to various passions and pleasures, passing our days in malice and envy, hated by others and hating one another. But when the goodness and loving kindness of God our Savior appeared, He saved us, not because of works done by us in righteousness, but according to His own mercy, by the washing of regeneration and renewal of the Holy Spirit.”—Titus 3:2-5