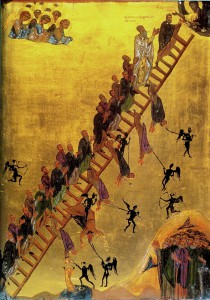 The reason why the Greek Orthodox and Russian Orthodox hesitantly accept divorce and remarriage today can be traced back to a 9th century synod, where Greece had a pre-emptive episode of England’s Henry VIII’s libido issues. In fact, the Greek bishops of the 9th century held a synod to recognize the legitimacy of the emperor Constantine’s second marriage. A Greek monk, St. Theodore, stood alone in the breach, calling this synod the “Adultery-Synod,” moecho-synodus in Greek. Like history that would be repeated seven hundred years later in England with Henry VIII versus St. Thomas More, the Greek bishops and the emperor stood behind the synod of adultery, not behind the saint.

St. Theodore the Studite was also a champion in speaking against slavery and iconoclasm (removing pictures from Churches.) But in upholding traditional marriage, he suffered the most. He was whipped, imprisoned and exiled away from his monastery. The saint not only blew the whistle on the emperor, but also on those priests who gave silent consent to his sin. St. Theodore said that in “crowning adultery, the priest, Giuseppe, is in opposition to the teachings of Christ and has violated the law of God.”  Roberto de Mattei remarks that “for Theodore, the Patriarch Tarasios had likewise to be condemned, since, even if not approving the new marriage, he showed himself tolerant of it, thus avoiding the Emperor’s excommunication and the priest Giuseppe’s punishment.”

St. Theodore simply stood by Jesus Christ who said:  “Everyone who divorces his wife and marries another commits adultery, and he who marries a woman divorced from her husband commits adultery.”—Luke 16:18

Before applying this to the upcoming synod, I want to consider an important question of Catholic morality:  When a monk-saint quotes Scripture against his own bishops, how is this different from Martin Luther? If both used the Bible-alone for morality, then how could it be true that one died a heretic and the other a saint? Indeed, even the 1983 Code of Canon Law says “Christ’s faithful are bound to adhere, with a religious submission of mind, to this authentic magisterium of their Bishops.”—Can 753.  Where do we draw the line as Catholics?

Before getting to the answer, I want to further build up my argument against St. Theodore. Orthodox and Catholic theologies rightly consider the transmission of truth to flow through the hierarchy of the Church (Bishops to Priests to Laity.) This is a reflection of the hierarchy of truth given through the 9 choirs of angels (Seraphim, Cherubim, Thrones, etc.) This hierarchy of communication should not be broken. This is how Orthodox and Catholics are different from Protestants: The order of hierarchies is not to be considered clericalist, but angelic.

For humans, the true interpretation of Sacred Scripture comes from God through the bishops through the priests through the parents to the children. This is how catechesis should work. Notice this beautiful cascading down of the truth.  Similarly, within the angelic choirs’ hierarchy, there is a cascading-down of truth, but it is a non-verbal, angelic illumination: The angels who are closest to God, the Seraphim, communicate down to the Cherubim and likewise to the Thrones to the Dominations to the Powers to the Principalities to the Archangels to the Angels to finally the angels’ work in our lives on earth. (Notice that the highest angels do nothing but contemplation and the lowest angels deal with measly human affairs.)

In any case, besides the hierarchy of the transmission of truth among the angels revealing the perversity of a Sola-Scriptura-interpretation of Divine Revelation, there is the positive and beautiful call to an order of obedience to the hierarchy in this transmission of truth in both communities—on earth and in heaven. This obedience of low angels to high angels was never violated.

Except for once—now my counterargument—when St. Michael the Archangel himself attacked Lucifer for placing himself above God Almighty. During the great angelic battle in heaven (Rev 12:7), the military ranks were indeed broken and God blessed the lower angel reminding the disobedient higher angel that no one is like God (מיכאל, Mi-cha-El? Who is like God?) Not even the Seraphim are like God.

Not even the bishops. Martin Luther broke rank against the bishops to begin a mutiny against Divine Revelation on marriage. St. Theodore the Studite broke rank against the bishops to end a mutiny against Divine Revelation of Marriage. Actually, Theodore never broke rank. He essentially said Who is like God’s Divine Revelation on the indissolubility of a sacramental marriage. Even in this, Theodore obeyed the Church hierarchy who supported the Emperors who threw him into exile three times. He never started a new “Church.” Theodore suffered within the Church—not without in schism—all for the sake of the truth. Holy Orders must be honored, but still Theodore gave primacy of place to God: No synod can change the truth of the Gospels and the traditional Magisterium.

People often say that the sensus fidei (sense of the faithful on doctrinal issues) is infallible, implying that we need a democratic vote of doctrines like contraception. Bishop Morlino of Madison wonderfully answers these people by reminding them that the infallibility of sensus fidei actually includes not only those Catholics alive, but also those dead: the billions of Catholics who have gone before these dark days, who held firm to the truths of the Gospel (or at least tried to, an important attraction to the Divine Mercy of Our Redeemer.)

Speaking of ancestors, all four of my mother’s grandparents relocated in the early 20th century from Counties Mayo and Roscommon, Ireland to the South Side of Chicago. Thus, I have a great love for Chicago Catholicism. My heart broke when I read the new Archbishop’s homily from this week (23 August 2015.) Archbishop Cupich said the following about the upcoming synod of sexuality:

“With the upcoming synod, it is clear that the Holy Father is calling the Church to examine our categories of expression about what we believe and be open to new avenues and creativity when it comes to accompanying families. All of this has much to say to us in Chicago, that we not settle for solutions that no longer work, expressions that no longer inspire and ways of working that stifle creativity and collaboration.”

With my extended family’s roots in Chicago, I have to wonder: Which expression of Catholicism is not working in Chicago? Bernadin’s seamless garment? Or perhaps Cupich is speaking of the many families found in this video of a Mass in Chicago in 1941, narrated by Venerable Archbishop Fulton Sheen:

To be sure, there is nothing wrong with Archbishop Cupich’s denotation in the above quote. He said nothing heretical in the above quote. But let’s remember: Only a legalistic society considers denotation without connotation. Is the connotation of Archbishop Cupich’s quote that the Catholic Church will integrate “creativity” in regards to doctrinal “solutions that no longer work” in reference to the morality of homosexual actions or Holy Communion for the divorced and remarried? We’ll have to wait until the synod to see!

Telescoping outside of the world of sexual morality, let me say a brief word on the morality of the tongue and pen: I wonder how many of us Catholics of all vocations, priest and laity, right or left, think that we’ll be able to stand before God at our death and justify our small lies and large deceptions of others by saying things like, “Technically in my denotation, I did not say…”

We priests and bishops will answer to God for teaching sins of both commission and omission, for God will not be tricked by our legalistic subterfuge. I think that at our judgment, each one of us will answer both for the denotations and connotations of our words. We will answer not only for what we “technically” said, but for the fruits in others’ lives produced by our teachings and even attitudes.

These fruits (life-based or rotten) found in others’ lives (most especially our children’s catechesis, be them our spiritual children or biological children) will all be made clear at the General Judgment, for then we will see the outcome of the lives that we formed so intimately. There will be no word games at the General Judgment—only an arrival at our eternal reward—where we join those we guided in word and example, for better…or for worse.