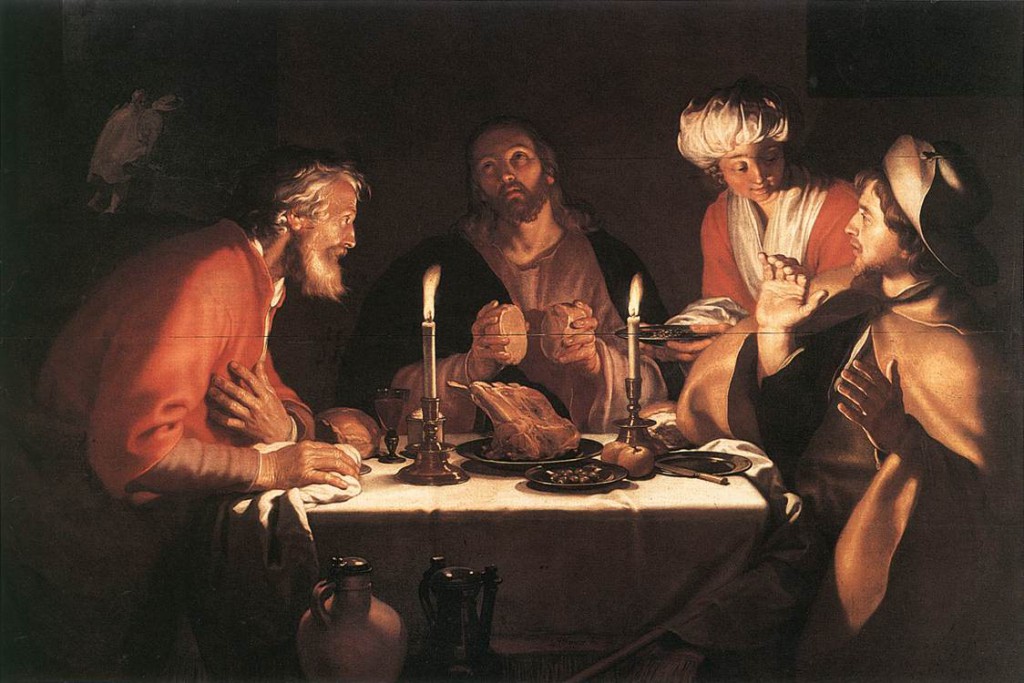 But one day, in this very hermitage, I was reading the Gospel of St. John, and I noticed that the chest of Jesus (upon which the Apostle John listened to the heartbeat of love at the last supper) was the same Greek word (κόλπον ) as found much, much earlier in John 1:18:

No man hath seen God at any time: the only begotten Son who is in the bosom of the Father, He hath declared Him.

That word “bosom” comes from κόλπον or kolpon from the noun kolpos.  It might sound feminine, but rather, it means the very core of any person´s chest, or perhaps his or her heart.  Again, this is that upon which St. John leaned the night Jesus was to die for him.  Total strength and intimacy in the Passion, in the Eucharist, yet total silence and contemplative gaze of Divine Love.

But what about John 1:18?  It means that there is a Heart of the Father to be spoken of, as my hermit had realized.  Still, we went deeper, for that day we found that κόλπον had a strange double-meaning in the Greek language.  It also means the bay of a sea. (See Acts 27:39 for proof of this.)  Put this on the back burner for a minute…

That word in the blue above “declared” is actually a past participle, ἐξηγήσατο, coming from the Greek verb exegeomai where we get the English word exegesis. The definition of exegeomai is “to narrate or recount, to draw out in narrative or unfold in teaching.” It was also used in more ancient Greek to include the interpretation of things sacred and divine, oracles and dreams.

Put this all together and John 1:18 is telling us in Greek: Jesus unfolds the entire narrative of the bay of the Father´s heart.

Jesus leads us to Our Father’s Ocean of Mercy by a full-unfolding of His own life which fulfills the Old Testament prophetically, and fulfills every twist and turn of our lives pre-emptively.  The Heavenly Jerusalem we all await is the Heart of the Father.

The narrative of salvation history is not unfolded under sodium-lights, but while walking a dirty path:

“`Was it not necessary that the Christ should suffer these things and enter into his glory?´ And beginning with Moses and all the Prophets, He interpreted to them in all the Scriptures the things concerning himself.”(Luke 24:26-27)

Jesus says this on the road to Emmaus, the same title as the painting above painting by Abraham Bloemaert.  Here converge the Eucharist, the heart of Jesus, the heart of the Father…within the pilgrimage of mankind and the unveiling of salvation history.

Jesus shows how every prophetic utterance of the Old Testament, every betrayal, every twist and turn of salvation history redounds to the gulf of the Father’s Heart for mankind, the one bay that Jesus wishes to walk us back to, if only we’ll follow in His footsteps.