I was baptized, confirmed, worked as a city paramedic, and was later ordained a Catholic priest in the city limits of Denver, Colorado.  Amazingly, what would one day be the city limits of Denver was originally under the jurisdiction of at least six apostolic territories due to shifting Catholic boundaries.  (I am not here writing about different bishops.  Denver has had eight ordinaries—three bishops and five archbishops—since its foundation as a diocese in 1868.)  Rather, I am writing here that the land of northern Colorado (specifically Denver) was found under many different dioceses as ecclesiastical borders shifted.

In my seminary (also in Denver) we took a class on the history of Catholicism in Colorado.  Although I no longer have my text for that class, I recalled how northern Colorado was under the diocese or jurisdiction of Mexico City and then New Orleans!  I decided to do some research online and was only able to corroborate some of this information.  However, it was close enough to my memory to put in a blog post, here called “Six Flags Over Colorado” to indicate how we have been a part of four dioceses or territories.  Please email me with corrections from real books, as this is difficult research to corroborate online.

Flag 1:  In 1600 Denver Was in the Archdiocese of Mexico City 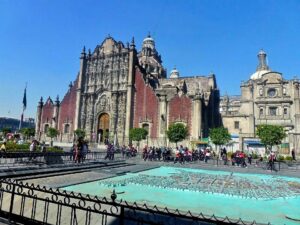 The first bishop of Mexico City (beginning in 1530) was the famous Juan de Zumárraga, a Franciscan who first saw the image of Our Lady of Guadalupe on the tilma of St. Juan Diego.   That Denver was once in the Archdiocese of Mexico City is the difficult to prove, as I’m only recalling this from my memory of my class History of Catholicism in Colorado.  But I’m 98% sure I’m remembering this correctly, namely, that most of North America was under the Archdiocese of Mexico City in the 16th century.  Catholic Answers makes some mention of this enormous expanse of a diocese: “The boundaries of the Diocese of Mexico were at first not well defined. When Cuba was discovered three sees were erected, but when the prelates arrived, their episcopal sees had been destroyed, and the inhabitants had fled. In order to avoid such mistakes, the Holy See allowed the kings of Spain to fix the boundaries of the new dioceses erected on the American continent, still considered a part of Asia. From 1500 to 1863 the Diocese of Mexico extended from the Atlantic to the Pacific, namely from Tampico to Acapulco.”  Of course, there was probably very very few people in the modern-day city limits of Denver, CO in AD 1600.  In fact, Colorado would not see her first Catholic Church built for another 250 years.  (Bishop Machebeuf built Our Lady of Guadeloupe in Conejos in southern Colorado in 1858 as the first Catholic Church of Colorado.)

Flag 2:  In 1803 Denver Was in the Archdiocese of New Orleans 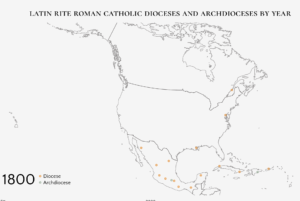 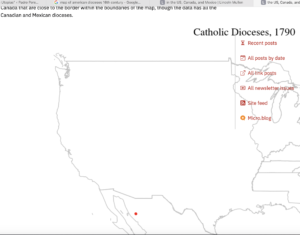 The first of the three maps directly above is the Louisiana Purchase as just a secular map that has nothing to do with dioceses.  Most of what is now considered “Northern Colorado” was contained in the 1803 Louisiana Purchase as you can see in that map.  The second and third of the above three maps are the best maps I could find online of dioceses at the time.  Both seem to indicate that the entire Western United States were technically under the apostolic jurisdiction of the Archdiocese of New Orleans.  (This is not to say diocesan priests were stocking parishes in the wide expanse of the wild west.  At that time, it was mostly the bravest and boldest Franciscans and Jesuits setting up mission Churches across the enormous Louisiana Purchase.)  But technically, every square foot of the planet is under someone’s Catholic jurisdiction.  For example, St. Francis Xavier (whose feast day was on 3 Dec.) was made Apostolic Nuncio or delegate by the Pope to the entire Eastern Hemisphere in 1541 as he departed from Lisbon, Portugal to Goa, India.  In the above two maps, it appears that in 1803, Denver was under the jurisdiction of the Archdiocese of New Orleans. 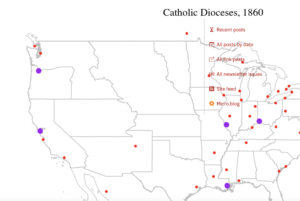 Encyclopedia.com writes the Catholic Church had this area named under the jurisdiction of the Apostolic delegate to “Indian Territory” in 1858: “The Colorado Gold Rush of the mid-19th century sparked population growth and led to the establishment of a Catholic diocese in Colorado. After prospectors discovered gold in the Rocky Mountains near Denver in July 1858, miners flooded into the region. Since the area north of the Arkansas River and east of the mountains was included in the Kansas and Nebraska Territories, it fell within the purview of John B. Miége, vicar apostolic of Indian Territory. In May 1860, Miége journeyed from his headquarters at Leavenworth, Kansas Territory, to the Colorado goldfields. His purpose was to investigate the situation in the goldfields and to build a church for the many Catholics who had journeyed to the central Rockies.” 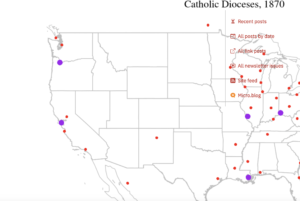 Although Colorado was admitted to the union in 1876, the area already had some Catholics before that, and by 1860, they were technically under the bishop of Santa Fe, New Mexico.  Encyclopedia.com reads:  “In May 1860… Miége established a parish and promised to send a priest to the Catholics who worked the goldfields around Denver. Finding that he was unable to spare a priest for the new parish in Denver, Miége convinced the Holy See to transfer responsibility for Colorado to the Diocese of Santa Fe.  To fill the Denver post, in October 1860 Bishop Lamy sent his close friend Joseph P. Machebeuf (1812–1889), accompanied by a young French priest, Jean Raverdy (1831–1889). Machebeuf had served as a missionary on American frontiers for more than 20 years, but Raverdy was only recently ordained. In Denver, the duo found an incomplete church building and a parish discouraged by their long wait for a priest. Ten Catholic families greeted the priests, though more than 200, including non-Catholics, attended Sunday Mass on a regular basis. In early 1861, Machebeuf struck out in search of Catholics in the goldfields, leaving Raverdy to offer Masses and to learn English. Machebeuf’s buggy served as a rectory and chapel on wheels. On his tour, Machebeuf established parishes at Arapahoe City, Golden, and Central City and visited the principal mining towns.” 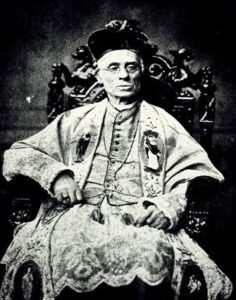 The first bishop of Colorado, Joseph Machebeuf, a Frenchman.

The Wikipedia page of the Roman Catholic Archdiocese of Denver says, “In 1868, Pope Pius IX split territory from the Diocese of Santa Fe in New Mexico and the Diocese of Grass Valley in California to form the Vicariate Apostolic of Colorado and Utah.”  Encyclopedia.com adds:  “In 1868, when the Holy See responded positively to his request that Colorado be separated from the Diocese of Santa Fe and formed into a new ecclesiastical jurisdiction, Machebeuf was appointed vicar apostolic of Colorado. Before his ordination as a bishop, Machebeuf made a tour of the East Coast and upper Midwest, hoping to raise funds for the purchase of land and to acquire new priests for his vicariate. He met with little success. On his return, however, Coloradans feted their new bishop with a parade and reception..”

Notice above in 1868, Denver was under the Vicariate Apostolic of Colorado and Utah.  But in 1870, this got further divided (for good reason.)  Wikipedia writes, “In 1870, he changed the name to the Vicariate Apostolic of Colorado, and transferred the territory of Utah to the Archdiocese of San Francisco.”  Finally, (on what would one day be my birthday exactly 91 years later) the Archdiocese of Denver was established in 1887.  Wikipedia states that on 16 August 1887, “Pope Leo XIII created the Diocese of Denver, which covered the entire state of Colorado.”

Since then, Colorado has been split into three dioceses.  They had apparently thought of dividing Colorado Catholic parishes into groupings found longitudinally into the dioceses of “The Eastern Plains” and “The Front Range” and “The Western Slope.”  However, that breakdown would have not economically benefitted the Eastern Plains or Western Slope.  Therefore, the chancery divided Catholic Colorado latitudinally, going north to south as:  The Archdiocese of Denver, the diocese of Colorado Springs and the diocese of Pueblo.