American Mass Attendance Before and After “the Council.” 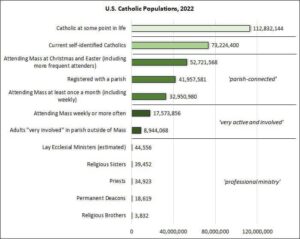 A new CARA study quoting Gallup polls has recently published statistics on current American Catholicism as seen above. We have all known for awhile that there were more ex-Catholics than Catholics in the USA, but the spread is enormous in the above numbers that just came out in 2022. In one graphic from CARA (above chart) see especially that there’s almost 113 million US Catholics baptized but only about 53 million of them even attempt to attend yearly Mass at Christmas and Easter.

Another study (above) came out a few years ago showing the striking comparisons between the faith-based practices of Catholics who currently go to the Traditional Latin Mass (TLM) vs. those who go to the Novus Ordo Mass (NOM.)  Notice the above questions put to Catholics on attending weekly Mass and [at least] going to annual confession:  TLM Catholics come in at 98% and NOM Catholics come in at 25%.

Some people say that’s because trads are “self-selective.” This is true. Nearly every community in our mobile Western society is self-selective except those of natural consequence like birth or geography. All of life today is self-selective, so what does it say about traditionalists if they always find in their travels a TLM community that takes the faith seriously? It says they’re selecting a place that takes Divine Revelation seriously.

It is true that there are more Catholics in the US in 2022 than there was in 1960, but this is greatly due to immigration from Latin American countries, not the “new evangelization” working at a grassroots level. Also, remember our increase in Catholics’ numbers are obviously not proportionate to the enormous growth in ex-Catholics filling the country as seen in the first CARA graph at the top of this site. 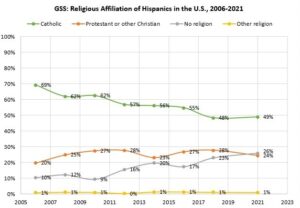 Even Latin-American immigrants are not practicing their faith after Vatican II as much as before as the above new graph from CARA also reveals. We see above a constant decline in Latinos practicing the Faith in the USA. Indeed, never in Church history has any group of baptized Catholics (now writing here of US Catholics of all races) admitted that less than a quarter of them go to Sunday Mass. (Mix monthly confession into that stat and I bet the number would probably drop to less than 2% of the 112.8M Americans who once identified as Catholic now go to monthly confession.)

Before Vatican II, 80% of Catholics went to Mass. Many neo-cons reply to this stat: “Well, okay, but my grandparents didn’t have a relationship with Jesus.”  First of all, they couldn’t possibly know that.  Secondly, my easy rebuttal to their shallow counter-argument is this: And the 60 million modernist American Catholics in the top graph who can’t even get to Christmas or Easter Mass have some fiery relationship with Jesus Christ?  How’d that liturgical and doctrinal experiment work out for you?

Many Napa-style conservative Catholics have an answer to that.  They assert that the giant loss of Catholics in the western hemisphere over the past 60 years is not due to the revolution of Vatican II, but rather due to the sexual revolution . Fine. But if that were true, then why did an enormous percentage of conservative faith-based North American and South American Catholics go to protestant communities over the several decades following the council? Did the sexual revolution not touch those protestant mega churches?  Let’s just admit: This modernist experiment of making a new Catholic faith and liturgy has completely failed.  That’s not my opinion. It’s all in the numbers.  If you want to call something “schismatic,” call it to the stats above or below: 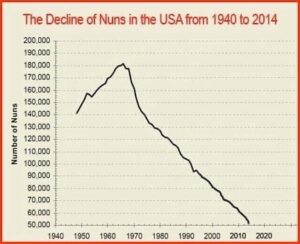 But this is why all we TLM-Catholics must bear the brunt of the anger of the modernists:  We’re an indictment against their liturgical and doctrinal experiment that utterly failed at their “opening of the windows of the Church to the world.” Or, scary-version: We traditional Catholics are stopping the current regime’s intended auto-demolition of the faith.