Saturday Night Live recently had a skit go viral. In the skit, several middle-aged progressive NYC couples are all at a dinner in a restaurant and they begin to gently admit they were wrong about everything-covid. It’s actually funnier than most of the stuff from the past few years because it’s based on the truth. Truth is apparently allowed on SNL again. At first I found this skit funny, but then it hit me: It’s not funny at all. Leftists are going to want conservatives to laugh with them about how wrong they were on everything covid and we on the right are supposed to forget about it because we’re the Christians. Most conservatives will indeed reach across the aisle and forgive the leftists, turning a blind eye to the millions of jobs lost as well as the hundreds of thousands of families separated on vaccine debates and the fact the death toll is now certainly higher from lockdowns suicides and overdoses (combined with adverse vaccine fatalities) than the virus itself.

Replacement Morality is a term I use to describe how those on the left first feel guilty for all of their sexual sins, abortions, and enormous paychecks (usually from being in cahoots with big tech or big pharma) and then take on surrogate cases of conscience to assuage their guilt.  For example, the same people who donate to racist organizations like Planned Parenthood, (an international killing organization that kills disproportionate amounts of African-American and minority children) end up donning bumper-stickers that say Black Lives Matter.  The very liberals who feel guilty about driving their own children to suicide pick up surrogate cases of conscience like George Floyd or the invasion of Ukraine that have nothing to do with them.

The hippies’ motto was “Make Love, Not War.”  But now the children of hippies are war mongers against people like Russia.  The little people on the left are blind to the fact that the big people on the left only see them as useful idiots, tools to accomplish the fortunes they will make if we go to war with Russia.  These moral projects of the left are all fake projects based on a very small truth.  For example, the masks and vaccines are based on a small truth that we had a virus that had a 99.92% survival rate.  The outrage over “climate change” is based on the fact we have had small changes in the earth’s temperatures (less pronounced, by the way, than what was seen before the Industrial Revolution, meaning it has nothing to do with “over-population.”) Or, consider how fighting for “trans-rights” is often a fight to chemically mutilate children (something Fr. James Martin SJ was recently defending here.)

So, if the people who are promoting the chemical mutilation of children all of a sudden want us to “defend Ukrainians,” then you can be assured none of their projects are altruistic.  At best, it’s politics.  At worst, they are possessed by demons.  But once they are proved wrong on a topic, they make jokes like it’s no big deal and we on the right are supposed to let them off the hook for overturning science, for overturning Divine Revelation, for overturning natural law, for overturning reason.  Then it’s all a joke, like the SNL skit above.

Here’s how I suspect “replacement morality” works theologically: When leftists are either ignorant of (or rebellious to) the call to give one’s sins to Jesus Christ to be forgiven, they apparently must feel self-righteous about a panoply of fake moral issues. Of course, I’m not saying the virus is fake or there was no Russian invasion of Ukraine. But I am saying that pro-abortion globalists like Soros (who apparently has tremendous investments in Ukraine) repeatedly manipulate young persons’ desires to feel like they’re actually good people because, you know, “At least I’m not as bad as Putin.”

I believe that when you don’t give your sins to Jesus Christ in baptism or confession according to the rules of traditional Catholicism, then the devil will introduce into your cerebrum surrogate cases of conscience to make you feel better about your own past sins.  We’re talking fake issues like “climate change.”  If you feel self-righteous about fake issues, then you never have to tackle the real issues of your life. And because the devil is a liar, he can only introduce fake issues of conscience in your brain in which you may compare yourself to others. Eventually, all of these issues are found to be fake, as I pointed out in the Saturday Night Live skit in the first paragraph. When you don’t have Christ as the center of your life in a post-Christian country, you will apparently choose an issue of replacement morality like the giant sign at Denver International Airport (seen above) that reads “Wear Your Mask: It’s the right thing to do.” 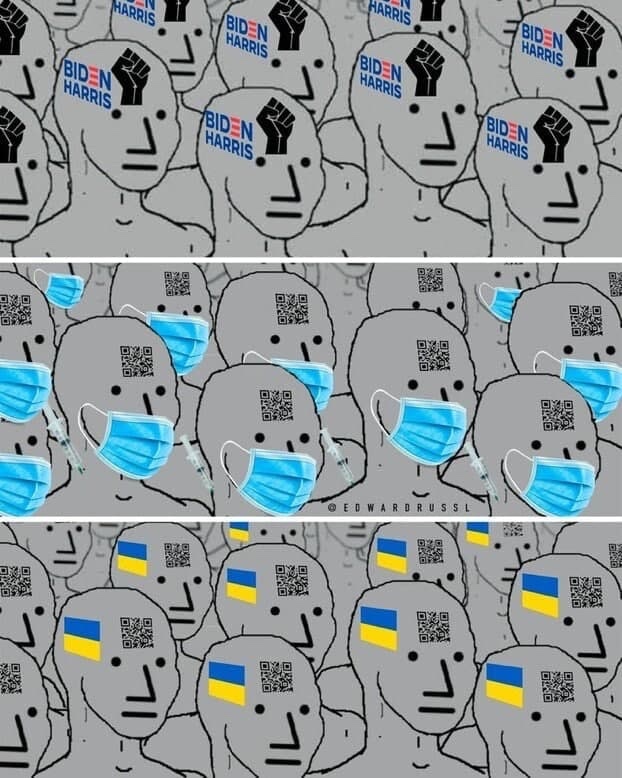 Every society that doesn’t have Christ as their center is deceived in a million ways. But what is so spectacularly sad about the left currently are several things.:

1) The left is fervent in their blindness. The poem The Second Coming by William Butler Yeats reads:  “The best lack all conviction, while the worst are full of passionate intensity.”  The creed of the left says ridiculous things like “Water is life” but in rejecting real science and real religion, they have no idea what they are even saying at this point.  It’s amazing at this point to watch a group of possibly-diabolically possessed people trying to pretend like they are morally superior to regular, say, blue-collar truck-drivers in Canada who simply want their personal freedom and a paycheck.

2) These allegedly non-judgmental leftists always feel the need to compare themselves to an ever-changing boogey-man on the right. (It’s almost as if their lives speak something like:  “I may use contraception in my marriage, but at least I’m not invading an innocent country like Putin.”) And even though this invasion is real, it’s fascinating to me how these “non-judgmental” leftists are constantly making false-accusations to cancel others.  In fact, a few on the left are now implying that Russians do not have a right to live.  Communism is now in the West, but notice that it’s always the communists over the past 100 years who are enacting genocide-after-genocide in order to “save lives.”  Something is fishy in this Russia vs. Ukraine conflict and I don’t claim to know what it is.  I certainly don’t support Putin invading a sovereign nation, but if the very people in the West who wanted us to take an experimental government injection are all the same group of morons who want us to invade Russia, you can be sure they’re following demons, not angels. 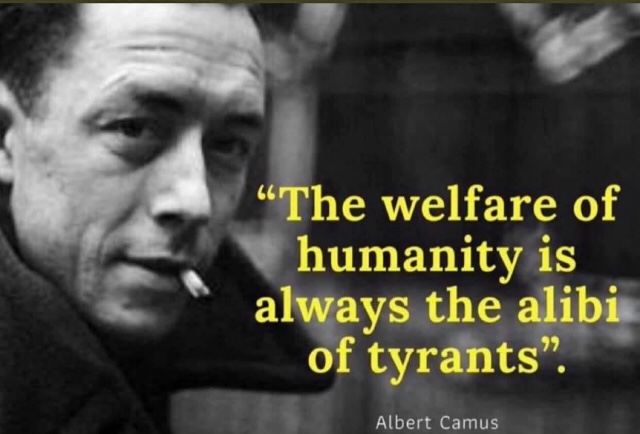 3) The left is repeatedly deceived by their own big governments into oppressing the little guy. Again, there’s something else behind the Western Academy’s outrage if our professors here in American Universities have no concern for the genocide in Yemen or China’s own killing of their Uyghurs but are all putting up Ukrainian flags on their Twitter handle . Obviously, the left in the US doesn’t actually care about Ukrainians. Soros (or someone like him) has wound-up their mainstream media to make this another surrogate case of replacement morality and self-righteous rage.  To be sure, I don’t see the little-guys on the left as “useful idiots” for the big-guys on the left.  But the big-guys on the left certainly do, and the little people on the left will be seen as “tools” who will be discarded by their overlord-oligarchs after doing their free moral-outrage for these big-tech and big-pharma companies and governments.

4)  The very people who claim to be freethinking individualists may be the most sheeple-thinking people in the history of the world. Even Russians watching the US right now admit that most Russians in the 1980s knew communism was garbage but went along with government lies for the sake of keeping their jobs.  These same Russians are shocked how stupid Americans are today to constantly believe the government-run mainstream media on things like covid.  This is true, even before we get to issues like Russia invading Ukraine. 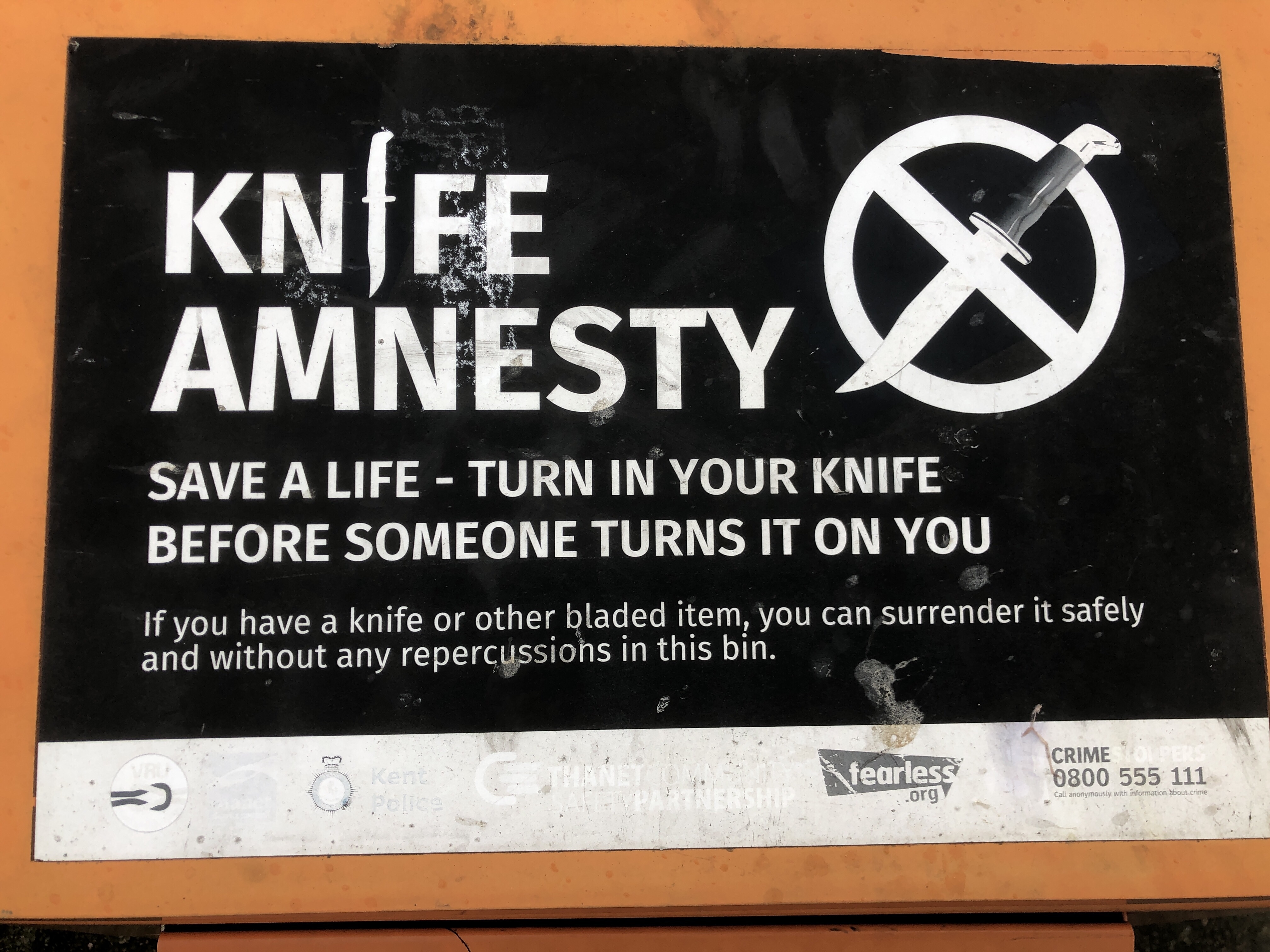 5) The left is blind to the practical issues of the real life of most of the world.  I was recently in the UK and I took the above picture of a metal box on the sidewalk.  It’s a government project, hoping knife wielding criminals in England (mostly Muslim, which the government there would never admit) will see this metal box and have an instantaneous conversion and hand over their dagger because the government asks them to.

So what should Christians do to help reduce this insanity of the leftists constantly choosing to feel self-righteous about the wrong issues? I don’t mean this next sentence to sound self-righteous after ripping on being self-righteous, but I think the answer is simple: We need to tell everyone that no sin is too big for Jesus Christ to forgive in baptism or confession. And the reason this is not self-righteous is because many conservative Christians have amazing conversion accounts of their own lives. When a Christian tells his conversion story, it’s obvsiouly very difficult for a listener (on the left or on the right, for that matter) to say that account comes from self-righteousness. Why? Because the person telling the account frequently includes the vulnerability of his own enormous sins that Christ has forgiven. In doing this, he sinks the need for “replacement morality” in the listener and encourages anyone listening that one need no surrogate cases of conscience to stoke self-righteousness “for all have sinned and fall short of the glory of God, and are justified by His grace as a gift, through the redemption that is in Christ Jesus.”—Rom 3:23-24.