Our Lady of Guadalupe, Margaret Sanger and Hillary Clinton in March 2009 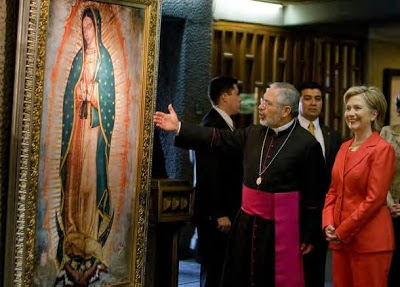 On Thursday, the 26th of March 2009, Secretary of State Hillary Clinton visited the Basilica of Our Lady of Guadalupe in Mexico City, Mexico.  The above framed image (on the left) of Mary, the mother of Jesus, was miraculously imprinted by heaven upon the tilma of St. Juan Diego, a 16th century saint in Mexico.  According to a Catholic News Agency (CNA) article Hillary Clinton asked the rector of the Basilica, Msgr. Monroy (in the above picture) “Who painted it?”  He responded, “God.”  Hillary Clinton seems to have laughed. (See video at end of blog post.)

On Friday, the 27th of March, 2009, the very next day, Hilary Clinton then received the Margaret Sanger Award from Planned Parenthood in Houston.  Receiving the award was a “great privilege,” Clinton said after the presentation. “I admire Margaret Sanger enormously, her courage, her tenacity, her vision…. I am really in awe of her.”

Let’s consider the significance of these two events.   First of all, on Thursday, Clinton saw the above framed image (top left) of Our Lady of Guadalupe which was miraculously imprinted by heaven upon the tilma of St. Juan Diego, a 16th century saint in Mexico.  Recall that this miraculous image of the Mother of God ultimately led nearly 10 million indigenous Mexican people to the waters of baptism of the Catholic faith in the same century, stopping the satanic Aztec sacrifices that had constituted a genocide against the neighboring indigenous nations of modern-day Mexico.  Clinton saw this tilma that stopped the slaughter of the innocents across Mexico 500 years ago with her own eyes.

Secondly, Clinton then immediately flew to Houston, home of the largest Planned Parenthood in the world and on the very next day received the Margaret Sanger award from Planned Parenthood.  As most readers know, Planned Parenthood has killed countless millions of unborn children.  their founder, Margaret Sanger, was a racist who founded Planned Parenthood to kill as many “blacks, slaves and Jews” as possible.  Sanger (whose name means bloody) once said: “Like the advocates of Birth Control, the eugenists, for instance, are seeking to assist the race toward the elimination of the unfit. Both are seeking a single end but they lay emphasis upon different methods.”  This was “to create a race of thoroughbreds.”

But to “create a race of thoroughbreds” was the goal of the Aztecs who were stopped only by the invading Spanish in the 16th century.  (What most Western history books conveniently leave out is that all the surrounding Mexican tribes joined the Spanish in the war against the Aztecs!)  But the valiant work of all the heroic Spanish Franciscans to baptize the indigenous people fell on mostly fallow soil until the miracle of Our Lady of Guadalupe converted so many Indians to the Catholic Faith.

La Emperatriz de las Americas (the Empress of the Americas) is Our Lady of Guadalupe. Perhaps she can be known as the extinguisher of American genocides.  Let us pray that those who mock life (like Margaret Sanger and Hillary Clinton) be proven wrong in American history. Let us beg for a conversion of North America in the 21st century that be rivaled only by the past conversion of Central America in the 16th century.