So-called “Middle-of-the-Road” Catholics are becoming increasingly distressed at their own defectors to the camp of the “far left” of Fr. James Martin SJ and the camp of the “far right” of Dr. Taylor Marshall.  These Middle-of-the-Road Catholics are concerned at how many “pro-life Catholics” will still vote for Biden, especially as a new group of “defectors to the left” listens to the likes of Fr. James Martin. Such clergy of the far-left discount the notion of being a “one-issue voter” on abortion as we approach the election.  For this reason, liberal “pro-life Catholics” may have no problem voting for Biden because of other issues they dislike about Trump.

But the remainder of this blog post is about theology, not politics.  The issue at hand is that these Middle-of-the-Road Catholics are more concerned with their own “defectors to the right” than those falling to the left.  Neo-cons who are against contraception but go to the Novus Ordo are increasingly distressed at how many of their own friends now secretly listen to Dr. Taylor Marshall at night, and go to a Traditional Latin Mass parish during the day.  They understand people have had enough random rules of “no communion on the tongue” under covid, but they do not want their friends to become extremists.

These Middle-of-the-Road Catholics (often called the neo-conservatives of Pope John Paul II) have an old apologetic against their critics to the left and their critics to the right. It goes something like this: “Jesus was persecuted by the Pharisees to the right and the Sadducees to the left.” In saying this, they imply that they are already like Jesus: Jesus was persecuted to the right and persecuted to the left, so also they have fully “struck the balance” of the true faith like He would have wanted for his humble flock of anawim: 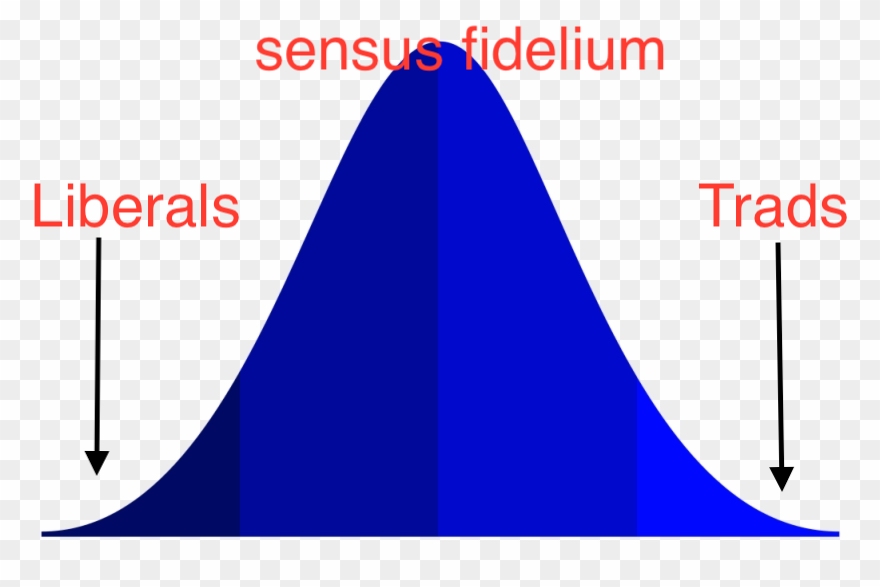 Indeed, perhaps the middle of the bell-curve folks at the top are correct since the sensus fidelium (the sense of the faithful) is historically an indicator of the Faith through the various ages of Church history.   Granted, it is not as concrete as the Magisterium, but the sensus fidelium (what most Catholics have a gut instinct for through history) normally reflects how the Holy Spirit is leading Catholics through time. Perhaps, in this case, the Middle-of-the-Road Catholics are not the lukewarm middle, but exactly what they claim to be:  The strong via-media of St. Thomas, the virtuous mountain between the vice-ridden valley of Fr. James Martin in his heretical liberalism to the left and the vice-ridden valley of Dr. Taylor Marshall’s schismatic traditionalists to the right.

The problem with the above conclusion is that it is based on a false premise. The above chart only functions in a time of non-crisis of Church history. In the Arian crisis of the Catholic Church in the 4th century, 99% of the bishops and the priests even the lay faithful erroneously believed that Jesus was not God. In that sense, the sensus-fidelium of the True Catholic Faith was found in the  0.1% of the believers to the far right: 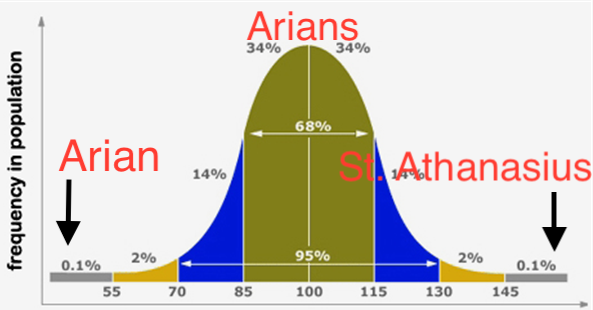 St. Athanasius and very his few followers constituted the only place on the 4th century spectrum where Apostolic Catholicism was found. Of course, this was known as the “Arian Crisis” precisely because most Catholics did not believe what Catholics previous to them (and after them) would believe. This was known as the “Arian Crisis” because 99% of Catholics had diverted from Apostolic Catholicism, and in that sense, the “sense of the faithful” was not found in “striking a balance” between being a liberal Arian (far left) or a moderate Arian (peak of bell curve.)  A conservative Arian was about as good as a liberal Arian.  Only those with St. Athanasius were true Catholics.

Of course, some people might now object and say: “Well, that’s ridiculous to compare Dr. Taylor Marshall to St. Athanasius since St. Athanasius never criticized Popes.” Whether the Pope threw St. Athanasius under the bus under duress is a topic greatly debated in history.  And in full disclosure, I will readily admit that I believe that the “St. Athanasius of our age” was indeed the rejected Archbishop Marcel Lefebvre.  Both bishops (Athanasius and Lefebvre) were both rejected by 99% of their brother bishops of the world not for being disobedient (like people now say of Lefebvre ) but for holding to Apostolic Catholicism.  Of course, it is confusing that St. Athansius was vindicated by the Church by the end of his life, but Archbishop Lefebvre was not.

But Lefebvre-aside and Marshall-aside, I think the better argument against my second bell-curve would be this: “Your bell-curve is based on a Church crisis where most of the Catholics did not believe in the Divinity of Christ. Most Catholics in the year 2020 believe in the Divinity of Christ.  And that is why you can not apply the second bell-curve to the 21st century. It is a conclusion based on a false-premise.  The truth is that we are not in a Church crisis like Arianism.”

My response:  To determine whether most Catholics believe in Apostolic Catholicism, we must look not at an Arianism that began to be formed around AD 300, but the new heresy of modernism that started to manifest its ugly head around AD 1900.  Now, I know modernism is a very overused term, so let’s clarify a few things. Modernism is not Catholics using modern technology or refusing to act like we’re in a trad time-warp to the 1880s where, say, men put wax in their mustaches and women talk with affected Victorian accents.   To be sure, most trads today don’t do this, but a few need to be reminded that rejecting modernism does not mean rejecting all customs and technology of the 21st century.

Modernism, as the heresy warned about by Pope St. Pius X, is essentially two things: 1) A man-centered Catholicism (in place of a God-centered Catholicism) and 2) A natural religion (in place of a supernatural religion.) Pope St. Pius X saw this coming around the year 1900 and he warned this would be the “synthesis of all heresies.” What is a “synthesis of all heresies”? It is essentially the resuscitation of all past heresies that would ultimately reject Apostolic Catholicism in favor of a new humanistic Christianity.

Neo-cons claim that trads are stuck in the 1950s while they themselves live in the simplicity of early Church.  Neo-cons claim that Catholicism is a pendulum that swings back and forth between liberal and conservative through the centuries, but always lands back in the middle-of-the-road, the via-media of the sensus-fidelium that rejects all unhealthy extremes to the far-right and far-left. To those “Middle of the Road Catholics” who genuinely believe they have the faith of St. Patrick or St. Catherine of Siena or St. Maximilian Kolbe, I have just one more piece of advice:  Read any Church history book published before 1950 and also read any saint book published before 1950.  Ask yourself if that is what your parish priest really believes.  You don’t even have to read Infiltration by Dr. Taylor Marshall to see that your “Middle of the Road Catholicism” is a new invention containing a liturgy and doctrine that looks absolutely nothing like the liturgy or doctrine of Pope St. Pius X or St. Catherine of Siena or St. Francis of Assisi.

For the trads, I say:  take courage.  If you are in the 0.1% of Catholics still quoting the Popes, Saints and martyrs of an unbroken deposit of the faith of 19 centuries, then you’re within the bell-curve of the sensus fidelium that transcends time. You’re simply living in the midst of a Church crisis marked by that horrible prophesy of Our Lady of Fatima who warned (in what was most likely the hidden part of the third secret of Fatima) that the faithful of the second half of the 20th century would unfortunately see as the apostasy of the Church from the top down.   That means the hierarchy would go first.  If this is truly the third secret of Fatima, then this global apostasy of priests and bishops (and even higher up) explains why St. Athanasius was vindicated by the end of his life but Archbishop Lefebvre was not. Lefebvre could not be vindicated by a modernist hierarchy that had already fallen to apostasy.  As the approved-apparition of Our Lady of La Salette predicted: “Rome will lose the Faith.”

But even if you don’t appreciate Archbishop Lefebvre, you can be sure of this:  If you’re currently standing with the 0.1% of Catholics who believe the same things believed by Pope St. Pius X or St. Catherine of Siena or St. Patrick, then you can get used to being persecuted from within the Church.  That is our lot as “trads” for believing what Christ had given to the Apostles as the single and unchanging deposit of the faith.  Contrary to neo-cons’ apologetics against us, the sensus fidelium is not what any isolated period of Catholics believe.  The true sensus fidelium of the bell-curve is what the Catholics of every age have believed.  And we’re already seeing this sensus fidelium move back to tradition…which is exactly why the lukewarm-middle is so scared.