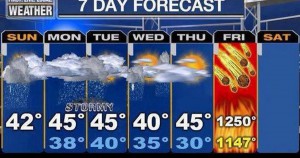 The Four Last Things refer to death, judgment, heaven and hell.  The 10 Last Things as a phrase does not exist,  but all are found in Scripture and Tradition.  Remember, Advent (starting tonight) is the time to prepare not only for Christ’s first coming, but also His second coming.

So, when is Jesus coming back to earth? The answer:  At the end of the world. When is the end of the world? Jesus said, “Watch therefore, for you know neither the day nor the hour.”—Mt 25:13. A theologian of Scripture here in the USA said he believes one reason why so many men have left the Catholic faith for Protestantism is because the Catholic pulpit is silent on the apocalypse. It’s sad, especially since we have the clearest and richest tradition.

Although we’ll be discussing no specific dates, the Sacred Scriptures and the Catechism of the Catholic Church (CCC) both name the ten things that must come at the end of the world:

1) The Gospel must first be preached to the whole world.  The extent of the level of the orthodoxy of the proclaimer is not clear, nor is it clear if every person or simply every nation will have heard the truth of Christ and His Church before the end of the world.  At least every land will have heard the basics by the second coming of Christ.

2) The Jews will return to the Holy Land and ultimately enter the Catholic Faith. Obviously, the first of these has happened (1948) and the second has not yet happened.  I had thought that the first was only a vestage of Protestant dispensationalism, but I recently discovered in Yves Dupont’s Catholic Prophesy that Saints like Alphonsus Liguori had taught that the Jews must return to Israel before Christ’s second return.

3) The Great Tribulation and Apostasy. Before the end of the world, CCC 675 speaks of “the Church’s ultimate trial” which will be both “apostasy from the truth” and “persecution.” Perhaps this one has been fulfilled. Indeed, many Catholics have apostatized, formally or informally. However, many Catholics and other Christians are being persecuted for following Christ. Since Christ’s birth, there have been 70 million Christian martyrs. Of these, the past hundred years have witnessed the majority— 45,500,000 of all 70,000,000 martyrdoms! Granted, most of these were Orthodox at the hands of communists; it’s still persecution of Christians. Jesus said this tribulation would also be accompanied by an increase in earthquakes (Mt 24:7.) Even CNN admits a marked increase in earthquakes the past 100 years.

4) The Anti-Christ or the man of lawlessness. Although there have been many anti-Christs (1 John 2:18) we’re going to have to experience the big one, “the son of destruction, who opposes and exalts himself against every so-called god or object of worship, so that he takes his seat in the temple of God, proclaiming himself to be God.”—2 Thess 2:3-4. See CCC 676–680.

5) The Restrainer. Mercy is defined as the divine limit to evil. The anti-Christ will deceive so many people that God will send someone to limit evil. His name in the Bible is “The Restrainer.” (I know “the Restrainer” sounds like the coolest Marvel Comic book hero. But he’s right in the Bible, which might explain why our Protestant brothers and sisters speculate about him more than Catholics.) Anyway, this mysterious good-guy will come along at the end of the world as an agent of Divine Mercy so that the man of lawlessness doesn’t win. “Only he who now restrains it will do so until [the man of lawlessness] is out of the way.”—2 Thess 2:7. Some Catholic theologians speculate the Restrainer will be St. John the Baptist or St. Michael the Archangel. But he is unknown at this point.

6) Widespread disturbances in nature. “Immediately after the distress of those days the sun will be darkened and the moon will not give its light; the stars will fall from the sky and the heavenly bodies will be shaken. At that time the sign of the Son of Man will appear in the sky, and all the nations of the earth will mourn. They will see the Son of Man coming on the clouds of the sky, with power and great glory.”—Mt 24:29-30

7) Second Coming of Jesus Christ. There’s an actual “day and hour” (Mt 24:36) to Christ’s return to earth. This day has definitely not yet come. “As the lightning comes from the east and shines as far as the west, so will be the coming of the Son of Man.”—Mt 24:27. Once, at a lunch, a priest with several impressive degrees snickered at me for taking these words literally. Then, I have to wonder: If Jesus doesn’t return with power, maybe he’ll return on a My Little Pony Cutie Mark Magic Princess Twilight Sparkle Charm Carriage Playset? (That’s an actual toy at Target! I have to wonder who named that…An 8 year old girl in love with a cutie named Mark who was allowed to combine her eleven favorite words randomly?) Anyway, my point isn’t to rally tough-guy fundamentalism. I just can’t imagine a fitting middle ground between Christ coming as a baby and then coming in glory. Unless…Jesus comes strolling into Seattle with corduroy pants and a Dockers short-sleeve at His awful second coming. For my part, I’ll believe the Apostle’s description of the last day: “For the Lord Himself will descend from heaven with a cry of command, with the voice of an archangel, and with the sound of the trumpet of God. And the dead in Christ will rise first.”—1 Thess 4:16. See CCC 681 and the 13th century hymn Dies Irae, “Day of wrath and doom impending…heaven and earth in ashes ending.” Google it. The rest of it gets even more terrible, in the ancient Latin sense of the word.

8) Final Judgment. The Church teaches that every one of us on earth will be judged by Christ at the end of life, be it our particular judgment or the general judgment. The particular judgment is what you will experience if you die before Jesus returns in glory. It’s simply your judgment when you come before God a bit after cardiac arrest. A great Spanish priest described that moment as a 2-dimensional instantaneous download of your entire life, replete with Christ’s judgment of you (heaven or hell). The general judgment, or the Last Judgment, however, is what everyone will experience when Christ returns to earth. This will also affect those who have already died. For everyone, it will be like a 3-dimensional instantaneous download of every good and evil action committed by every person on the planet (Luke 8:17) and how it affected you and vice-versa. In short, during your death and/or Christ’s return, your chance for mercy will be done. That’s what the confessional is for. On judgment day, you will answer for any unconfessed sins, and you will see how every one of your actions affected the whole world, for better or for worse. I’m not trying to scare you. This is Our Faith: You matter. See CCC 1021 and CCC 1038–1041.

9) Resurrection of the Body. Simultaneous to #8, everyone will get their body back. It will be physical, spiritual and hopefully glorified. I write “hopefully” because even those even in hell will get a body back for eternal torture (John 5:29.) Happily, 100% of those in purgatory will go to heaven and also get their glorified body back. But most adult Catholics think of heaven as an amorphous reality for the soul…kind of like a nursing home hot tub where billions of doped-up souls stare in a smiley bliss. Rather, let’s consider Jesus’ resurrection: He could eat fish but walk through walls; He shined with glory, but He had wounds. In fact, the four Catholic doctrinal points of the resurrection is that your new body will be: 1) Glorified (like Jesus at the Transfiguration), 2) Agile (not subject to gravity. I promise I’m not making this up.), 3) Subtle (from the Latin, meaning the body will obey the soul as the essential form of the body…meaning you won’t accidentally burp in your new body.) and 4) Impassible (unable to suffer.) Does this all sound just a little fantastic? CCC 996 says: “From the beginning, Christian faith in the resurrection has met with incomprehension and opposition. On no point does the Christian faith encounter more opposition than on the resurrection of the body.” Wait. No other point met with more opposition? What about contraception and same-sex marriage? You see, the resurrection of the body is the foundation of all other Catholic morality since “we must all appear before the judgment seat of Christ, so that each one may receive what is due for what he has done in the body, whether good or evil.”—2 Cor 5:10. Apparently, man’s notion of once-saved always-saved doesn’t fool God. See CCC 988–1019.

10) New Heavens and a New Earth. First, this earth will burn (2 Pt 3:10.) Then God will make a New Heavens and a New Earth (Is 65:17.) Where else did you expect to use your new body? Notice that the physical reality of eternity is already found in the Old Testament. For the Jews, the “age to come” will not be any more nebulous than this age. But it will be an era of peace. That era of the Messiah’s peace will permeate so deeply into creation that even the lion will lie down with the calf. (Show off that Bible trick at parties since 99% of you thought I should have written “lamb.” You’re wrong! See Isaiah 11:6.) There’s a solid section on the New Heavens and the New Earth in CCC 1042–1060. Finally, since I made fun of a goofy notion of heaven in #5, I really should highlight all of Christian history’s most beautiful description of heaven. It’s composed by the Holy Spirit through the Apostle John. This description of heaven spans from Revelation 21 to 22 (the last two chapters of the Bible) but here’s my favorite, the beginning of the end, literally and eschatologically:

Then I saw a new heaven and a new earth, for the first heaven and the first earth had passed away, and the sea was no more. And I saw the holy city, New Jerusalem, coming down out of heaven from God, prepared as a bride adorned for her husband. And I heard a loud voice from the throne saying, “Behold, the dwelling place of God is with man. He will dwell with them, and they will be His people, and God Himself will be with them as their God. He will wipe away every tear from their eyes, and death shall be no more.—Rev 21:1-4a

NB I originally wrote the above for Those Catholic Men, but since pubication I had remembered a few more things that must happen before Christ returns, hence the insertion of a few “new” ones.