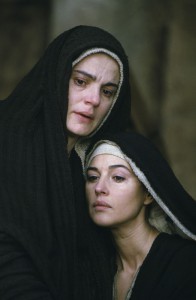 The above picture is taken from Mel Gibson’s The Passion of the Christ.  It is clear in this movie, and in most private revelations, that Mary (the Mother of Jesus) knew Mary Magdalene long before the crucifixion.

Granted, Scripturally I know of no other time when Mary and Mary are found in the same place, except John 19:25 (the three Mary’s at the crucifixion.)  So my theory can’t be proved from Scripture.  However, using common sense, we can be very sure that Mary and Mary didn’t simply introduce oneself to each the other at the foot of the cross.  It can be assumed that this would be an inappropriate time for introductions; Mary and Mary had to have known each other long before the crucifixion.

Even though she has very few words, let’s look at who Mary (the Mother of God) knew in the New Testament.  Of course, she is at the four most important events of salvation history, which gives us an idea of who knew her:

But then, on a smaller scale, it’s surprising who Mary knew.  Mary seemed to have a quiet presence in the life of everybody:

On the third day there was a wedding at Cana in Galilee, and the mother of Jesus was there. Jesus also was invited to the wedding with His disciples.—John 2:1

Mary seems to be the star of the invitation, where Jesus’ band of 12 fishermen were “also invited.”  Of course, Jesus never committed any sin of gluttony, but maybe Jesus’ disciples ate too much at weddings or something, because John makes it pretty clear they were an afterthought!

The Apostles all knew Mary.  Foremost was John the beloved, who was to live with the Blessed Virgin Mary after Christ’s Death (John 19:27) and assumedly after the Ascension.  (Their home was uncovered in Turkey in 1891, using the private revelations of Bl. Emmerich—the same visions that guided the making of the movie, the Passion of the Christ.)

John’s brother James, whose feast day we celebrate today, was not left orphaned by Mary.  As you know, Jesus sent James to evangelize Spain.  However, at one point James was ready to give up after only gaining 8 disciples.  Mary bi-located to him when he was praying at modern day Zaragoza, and (during the first approved Marian apparition) Mary told James not to give up, for the faith of that people would be as strong as the pillar that she was standing on.

There is a 17th century Spanish nun named Mary of Agreda who was given a private revelation of the entire life of Mary (the Mother of God.)  It is put into several thousand pages of a book that you can buy, the Mystical City of God (not to be confused with the work of St. Augustine by almost the same name.)  In the Mystical City of God, it is revealed to the nun of Agreda that Saul was always slated in God’s Providence to become the great Apostle of Jesus Christ to the nations.

However…this event was to happen much later that when it was originally “scheduled” by God, so to speak.  What changed the course of history was the prayers of the mother of Jesus.  After Pentecost, Mary saw in prophesy that Saul would become the chosen vessel, but she saw this was coming much later than when the Church needed such a weapon of love.  Mary begged God the Father to speed up this conversion, and God the Father answered; Saul became Paul much earlier than he was slated to.

What does any of this have to do with Mary Magdalene?

A few days ago, as I was offering the Mass on the Feast day of St. Mary Magdalene, the above scene from the movie hit me:  Mary holds Mary during the torture of Jesus.  I realized at that moment that all the great saints of the New Testament were really close to the Mother of God.  Even if you don’t believe in the private revelations that filled the movie of Mel Gibson or the Mystical City of God, common sense applied to Scripture reveals that the mother of Jesus intimately knew all the slobs and dignitaries of the New Testament.

Here’s how I want to tie all of this together:

After doing Total Consecration to Mary for the first time several years ago, I had actually come to believe the words of St. Louis De Montfort, namely, that there were a few certain saints (like St. Bernard or St. Bonaventure) who chose Mary as the quickest and surest way to Jesus Christ.  For a long time, I had taken this to be a development of doctrine of the middle-ages—a wonderful and valid one, to be sure—but a development of doctrine nonetheless.

But at the Mass a few days ago in honor of St. Mary Magdalene, as I thought of the above scene of Mary and Mary, I had this realization that Jesus’ mother is the dispersal vector of zeal for her Son for not only for the great saints of the middle-ages—but for all the tycoons of the New Testament.  This would surely include the conversion of St. Mary Magdalene.

In light of all the great people and the events of the first century Church, we have to come to the conclusion that the Holy Theotokos—she who carries God as the God-Bearer—is the one who gently brings all the top dogs of the New Testament to her Christ Jesus.  Even with Mary Magdalene, I imagine the mother of Jesus was the quickest and strongest way to her son.  So it will always be, for you and for me, too.